Paul Williams will fight anyone in November

Share All sharing options for: Paul Williams will fight anyone in November 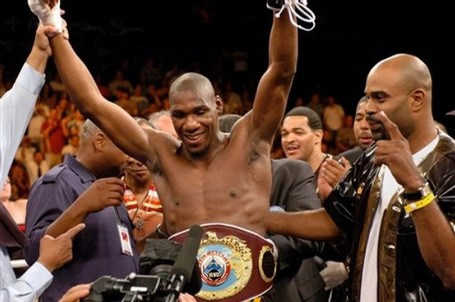 Early talk was that WBO welterweight titlist Paul Williams wanted to defend his belt when he returns to action on November 29, live on HBO.

"What Paul is doing is not very common in boxing. It goes back to the old days. We want to get Paul the biggest fight that we can, preferably at 147 to defend his title. If we can't get a challenge we at the level we are looking to get, we will then address the 154-pound division."

ESPN.com's Dan Rafael has said that a fight with junior middleweight titlist Verno Phillips, who controversially upset Cory Spinks earlier this year, has been on the table. HBO has expressed interest in the fight, according to Rafael.

At this point, it's a wait-and-see. I hope Paul finds a suitable challenger at 147 pounds, because right now, it looks like we're heading down the road of him vacating his title. Williams isn't interested in stay-busy defenses, he's trying to make big fights. Though he's no box office star yet, that's not due to a lack of talent, or a lack of excitement in the ring, really. He makes compelling fights. Which I guess is sort of the problem.