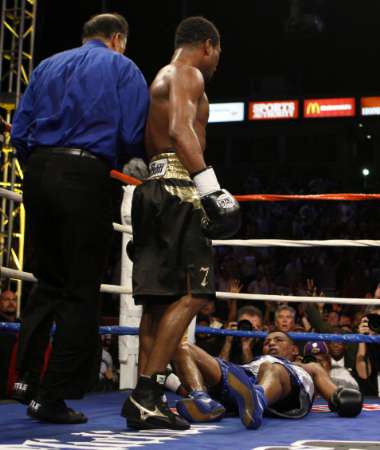 A 12-round professional boxing match lasts 36 minutes. It took Shane Mosley 35 minutes and 59 seconds, but he finally knocked out Ricardo Mayorga in a dramatic, stunning finish that had the Los Angeles crowd on its feet, roaring in approval.

The ending of the fight saw Mosley (45-5, 38 KO) drop Mayorga (29-7, 23 KO) after a powerful flurry of punches. With five seconds left, an unsteady Mayorga was allowed to continue by referee David Mendoza, which I maintain as the right call. If you can, don't let a fighter who has gotten up have a fight taken away from the ringside judges with that little time left. That's why those guys are there.

But instead of letting it get to those judges, Mosley simply sprung in on Mayorga, threw a single left hook, and crushed his foe with wicked ferocity. It was an excellent finish to a fight that was both entertaining and frustrating to watch.

No one will argue this as one of Mosley's greatest or prettiest performances. Though he was ahead 106-102 on my scorecard and would have won 116-110 had Mayorga not been knocked out, only the final moments of the 12th round and a dominant, punishing sixth round truly showed the vast gulf in skill that exists between these two fighters.

Judge Pat Russell had the fight in favor of Mayorga at the time of stoppage, which I find slightly remarkable, especially considering that Mr. Russell is such a fine referee, the man that was brilliant in his handling of current Fight of the Year front-runner Vazquez-Marquez III. By CompuBox numbers, Mosley decimated Mayorga, who was far busier but way less accurate.

Still, I thought Mayorga won his share of rounds, mostly because Mosley occasionally took his foot off the gas pedal and did absolutely nothing. Mayorga is awkward to fight, but no one as good as Shane Mosley should respect Mayorga's unorthodox flailings as much as Shane too frequently did.

The other thing to take into consideration was the weight, in two different ways. First off, Shane has never been a great 154-pound fighter. It's just too high for him. He was at his best at 135 pounds (where I'll maintain he's one of the greatest, ever, period) and was still excellent at 147. But at 154, he's just not been the same guy. He won the contested second fight against Oscar de la Hoya and twice vanquished a fading Fernando Vargas, but he was also beaten two times by Winky Wright and has just never quite looked like the Shane Mosley we know in those fights.

Secondly, both weighed in at 153 1/2 pounds, but Mayorga bounced up to 170 on HBO's unofficial scale, giving him a 10-pound in-ring advantage on Mosley.

Mosley probably has a couple more fights left in the gas tank, and I wouldn't object to any potential 147-pound fight out there. He's a legitimate contender still, and could be trouble for anyone. I'd love to see him fight Paul Williams next year, but he won't. As far as Cotto or Margarito go, he's probably just out of the running there until late next year.

It probably goes without saying that I'd also like to see him fight more than once a year.

Mayorga? Who cares what's next? Though he stood up longer than I thought he would tonight, he was whiny, he clinched a lot, and he never hurt Mosley. He brawled and got Mosley suckered into his sort of fight, where the opponent waits on Mayorga to throw his haymakers, but he was clearly outclassed. Again. There are Mayorga fights I'd watch still, but none that I would put in any other fighter's five fights I'd most like to see them in, if that makes sense.

On the undercard, Andre Berto took home a routine unanimous decision against veteran Steve Forbes, who is apparently contemplating retirement. Hey, there's really nothing out there for Stevie. At 147, he's grossly outmatched against the best fighters. He can't go heavier than that. No way he gets down to 135 anymore, and even if he did, what's he going to do there? 140 is a wasteland, essentially, with little money to be made if you're not fighting Ricky Hatton. If Stevie is comfortable with his lot in life and feels he's made his money and doesn't want to stick around as a gatekeeper, I say happy trails. Not many fighters walk out of the sport healthy and having never been knocked down, let alone out.

On the untelevised portion of the undercard, Luis Collazo returned with an eighth round TKO of Russell Jordan; ex-Klitschko bum of the month challenger Ray Austin won an eight-round decision against pitiful Domonic Jenkins in his first fight in 18 months; and super prospect Daniel Jacobs finally went the distance, improving to 10-0 (9) with a six-round decision win against Emmanuel Gonzalez.