Timothy Bradley considering move down to 135

Share All sharing options for: Timothy Bradley considering move down to 135 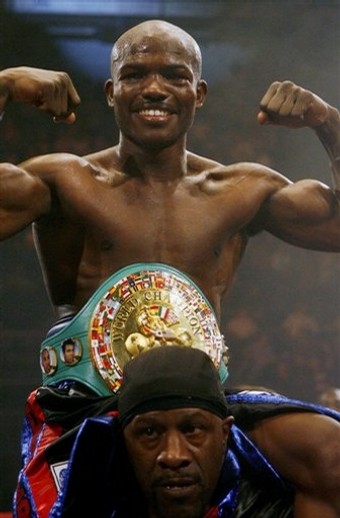 BoxingScene.com got the scoop from WBC junior welterweight titlist Timothy Bradley that the hot young titlist is considering moving down a class to lightweight:

"You might see me later this year and I'm even thinking about campaigning at 135 ... I already spoke with the doctor and he said that it's physically possible for me, and I will still be physically healthy. And I won't lose lean muscle mass. So y'all might see me at 135."

Bradly won his WBC title when he shocked Junior Witter in May, and defended for the first and thus far only time when he defeated natural lightweight Edner Cherry in the makeshift Showtime main event a couple weeks ago, meant to be the featured bout underneath Nate Campbell-Joan Guzman.

Tim Bradley just turned 25, and he's a gifted young boxer. I take nothing away from him, but I'd also be lying if I said I saw anything truly exceptional in his skillset. And at this moment, you need to be truly exceptional in some way to compete down at 135, with Pacquiao, Marquez, Campbell, Diaz, and even Casamayor around. That's a top five that won't be easy to crack. Plus there's Guzman if he gets his act together, the double tough Michael Katsidis, Julio Diaz, and several other strong fighters.

And while I note all those tough fighters and how hard it would be for Bradley to slither into the top tier, I hope everyone else is thinking the same thing I am: this young man has cojones. He wants to move from a dead division (which 140 is right now) to the hottest weight class in the sport, filled with not just big-name fighters, but a lot of really good and great fighters.

That takes guts. Yeah, Bradley wants to make the money associated with these fights, but that's no knock on him. He knows the risks. He knows 135 is a far tougher division. And if he's seriously considering that move, all the best to him. Boxing could use more guys that go, "Where's the competition, because that's where I want to be."

If I were the young man's career advisor, I would not tell him to go down this path. I'd urge him, strongly, to not do it. But I'm not in that position. Go get 'em, Timothy.