Share All sharing options for: Kotelnik-Salita waiting for doctor approval 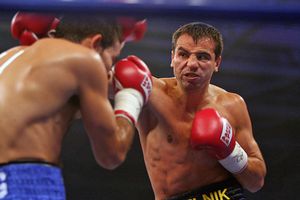 Though it was thought that WBA junior welterweight titlist Andreas Kotelnik (30-2-1, 13 KO) was pulling out of his November 8 defense against Dmitriy Salita (28-0-1, 16 KO) on the undercard of Calzaghe-Jones, Kotelnik tells BoxingScene.com that Square Ring "jumped the gun."

Kotelnik says he's waiting for doctor approval, and that he's not decided whether or not to take the fight with Salita. He suffered a rib injury in his September 13 defense against Norio Kimura.

If Kotelnik can't defend, former British Empire lightweight champion Willie Limond (29-2, 8 KO) will step in to fight Salita, which is about as unexciting a step down in competition as you can get. Limond has never seriously competed over 135 pounds, has no punching power (he did floor Amir Khan), and has no name in America, which will simply lead to a crowd wondering who the hell he is. Kotelink has no name value here, either, but at least he brings a title to the table.

Salita is a fairly interesting fighter, but I don't get featuring him on a pay-per-view undercard. While Calzaghe and Jones are proud of putting this fight on "by themselves," the fact of the matter is they have no ability to put together an attractive undercard at all. This card is on November 8, and the only thing confirmed is that Salita will fight either Kotelnik or Limond.