Share All sharing options for: Khan says Rubio not fired, only demoted 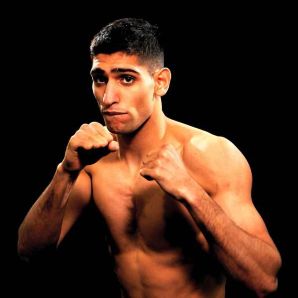 Amir Khan says that while he has signed to work with Freddie Roach at Freddie's Wild Card Gym in California, he has not fired famed Cuban amateur trainer Jorge Rubio -- only demoted him.

With Freddie Roach working the Pacquiao-de la Hoya fight on December 6, it's likely that Rubio will still be the man in Khan's corner for his comeback fight the same day.

The linked article also features Khan talking to Ricky Hatton, getting some advice about coming back. I dunno -- it took Hatton 44 fights and a lot of good fighters to get knocked out by the best fighter on the planet. Khan biffed it against an unknown puncher and has been in trouble a few times before that against the likes of Willie Limond and Michael Gomez.

Point being, Khan ain't the next Hatton.

Still, I wish Khan all the luck in the world. Particularly because with those whiskers, he's going to need it. He doesn't come off as a spoiled punk to me, which his detractors have said. I think he seems like a genuine, hard-working young man that wants to do his best to live up to the hype. Hopefully the head on his shoulders is good enough to carry him through trouble.