Clottey calls out Williams for November 29

Share All sharing options for: Clottey calls out Williams for November 29 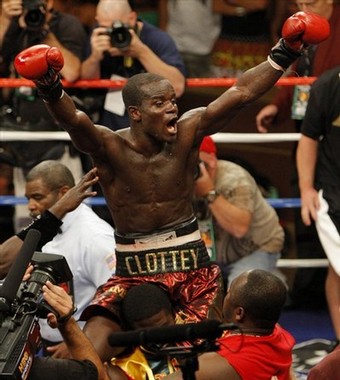 As Paul Williams keeps talking about no one wanting to fight him, BoxingScene.com reports that he may have found someone notable willing to take a fight with him in November.

So how about it? Honestly, if this fight doesn't happen on November 29, it's because someone was full of it. There's no reason for it to not happen unless HBO said no, and I can't imagine HBO saying no to a Williams-Clottey unification, a fight between two of the five best at the weight.

It's an interesting matchup, as Williams has come out firing his last two fights, a pair of first round knockouts over Carlos Quintana and Andy Kolle, showing a fire he seemed to be lacking against Quintana the first time, and even in his decision win against Antonio Margarito the year before. Williams had gotten to a point where it seemed like he was focusing too much on boxing, and when Quintana threw off his rhythm, it killed him. He's thrown hard shots against Quintana and Kolle the last two fights, throwing caution to the wind a bit and overwhelming by using his reach to do more than jab.

Clottey is a rugged customer, though, and can take a good punch. Coming off of a win over Zab Judah, he's as hot as he's ever been. Williams is not going to find a better opponent than this, and joke mandatory Michael Jennings (a Gary Lockett-level mandatory) certainly isn't in the same league.

Hopefully, they'll make this happen. Put your money where your mouth is, guys.