Share All sharing options for: Mondays with Boxers: September 29, 2008

The week in which Shane Mosley's age-hampered skills start being questioned, Vitali and Big Sam talk wood chopping, Roy Jones declares himself the greatest American fighter to ever live, and Vernon Forrest spares us all a third fight with Sergio Mora. 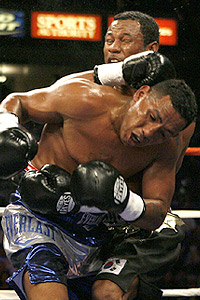 "If they let Shane Mosley fight Antonio Margarito they should be arrested." -- promoter Lou DiBella, representing neither man (ESPN.com)

"Margarito would put Shane in a pine box. I would put [Andre] Berto in with Shane Mosley right now." -- DiBella, who does promote Berto

"We're going to make them an indecent proposal for Mayweather." -- Richard Schaefer on Mayweather-Mosley

"Margarito has been talking about de la Hoya, but he needs to take care of some business with Shane and with Paul Williams before he can think about Oscar. Just because you have one good night doesn't mean you deserve an Oscar." -- Schaefer, who recently put Margarito on blast to fight Williams, but now thinks Mosley would be just as good of a challenge, though neither are, of course, Oscar de la Hoya

"I have to try and find fights now. I don't want to wait around for Cotto and Margarito." -- Shane Mosley (AP)

"I was proud of the way Shane came to fight. He didn't run. I thought I was doing well, and I came out to win the 12th round. But he caught me. I will tell you one thing -- he hit harder than I thought he would." -- the again-vanquished Ricardo Mayorga

"He reminds me of myself when I was younger." -- Mosley on Berto (HBO post-fight interview)

...AND THIS IS DEGENERATING QUICKLY, FOLKS...

"I have nothing against you, but I want to fight again for my title and take my title back." -- Vitali Klitschko to Samuel Peter (BoxingScene.com)

"Next time you want to win election, you come and see me. I'll teach him how to do that." -- Peter

"Chopping wood, you know, maybe it's good in a movie. If Samuel Peter wants to practice that, I have a lot of land in Siberia, a lot of wood. He'll get a lot of practice." -- Klitschko, on Peter chopping wood during training

"I'll chop wood or not chop wood, but I know the big tree is going down on October 11th." -- Peter

"Roy Jones, Jr. was the only guy I wanted to fight." -- Joe Calzaghe (Swanson PR)

"With Roy, I know he is going to fight. It's going to be the fight of the year." -- Calzaghe

"I wanted to fight and win what could be the last fight of my career in that building." -- Calzaghe, on Madison Square Garden

"My mama told me I need to stop fighting, but I just can't seem to stop yet." -- Jones

"Joe has been asking over and over again, 'Dad, I want to fight Roy Jones.' Today I am proud of his request and I am proud of my approval for this fight." -- Enzo Calzaghe

THE FORREST FOR THE TREES

"There won't be a third fight. There should have never been a second fight." -- Vernon Forrest, on the chances of fighting Sergio Mora a third time (BoxingScene.com)

"You come into this sport and you make your bones, then you make your economy money. I did everything I had to do to establish myself. I don't need to fight any of these up-and-coming guys. It makes no sense to me." -- Forrest, probably answering the question of whether or not he'll take a title challenge from any of 154's young guns

"I don't think he really ever found his identity, whether he's a boxer, a counterpuncher, or both." -- trainer Ronnie Shields on Oscar de la Hoya (ESPN.com)

"Big credit for Pascal taking the fight. I've had two so-called superstars flat-out run from me this year in Joe Calzaghe and Jermain Taylor. But Jean Pascal stepped up, and on December 6th, you're going to have two undefeated fighters in their primes fighting for a world title. It doesn't get any better than that." -- 168-pound contender Carl Froch (Hennessy Sports Press Release)

"I was lifting weights too much, and lifting too many burritos." -- heavyweight Chris Arreola, explaining his out-of-shape body in last Thursday's fight (Versus Network post-fight interview)