Share All sharing options for: Cintron would fight Margarito again 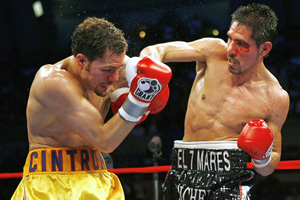 Ex-welterweight titlist Kermit Cintron (29-2, 27 KO) spoke with Primera Hora and said that he would be willing to fight Antonio Margarito for a third time.

Cintron is currently training with new head cornerman Ronnie Shields in Houston, preparing for his November 15 return bout against former junior welterweight titleholder Lovemore N'dou (46-10-1, 31 KO). Should Cintron win, given his TV-friendly style, he could jump right back into the welterweight title picture. Let's not forget that before Cintron agreed to fight Margarito a second time (in a second dominant, knockout win for Margarito), and before Paul Williams signed to fight Carlos Quintana in February, a deal was on the table for Cintron and Williams to unify. Cintron injured himself laying a hellacious beating on Jesse Feliciano last December, preventing the fight with Williams.

Now, I'm happy Kermit is moving on with a new trainer and a new promotional deal, and I think it shows guts for him to even say he'd consider fighting Margarito again. But nobody needs to see that fight happen a third time. The first two were more than enough evidence that Cintron, stylistically, is just no match for the big, rugged, durable Margarito.