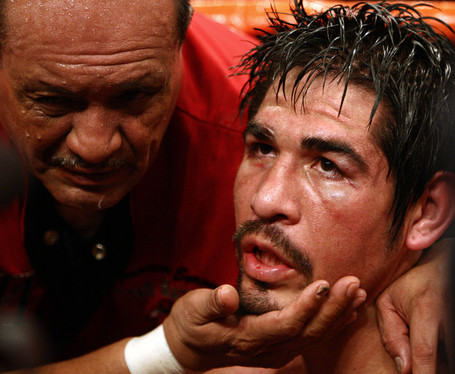 The controversy regarding Antonio Margarito's hand wraps before last night's fight is not something that should go away without real answers. This is no joke -- Margarito and his corner should be under very heavy fire right now, until they're proven to be in the clear for what would a serious offense if the worst case scenario proves true.

For those that might have missed it, Mosley trainer Nazim Richardson noticed an illegal substance on Margarito's wraps in the dressing room prior to the fight, and called over a member of the California State Athletic Commission to file a formal sort of complaint. Dean Lohuis, executive director of the CSAC, said a "plaster-like substance" was discovered under the wraps on both hands.

Golden Boy Promotions attorney Stephen Espinoza said the evidence was bagged and taken by the commission for an investigation.

Mosley's BALCO stuff, in my view, pales in comparison to a story like this. Late last year, South African featherweight Edward Mpofu was banned for life after plaster of Paris was found on his wraps. His manager was also given a ten-year ban.

And I don't think we need to go over the Billy Collins-Luis Resto scandal again, do we?

Plaster of Paris on the wraps is not just a cheating in the sport crime that offends fans and purists and all that jive. We're not talking about HGH and the Cream and the Clear here. We're talking about a criminal act that can dramatically raise the chances that a man dies in the ring. I am not accusing Margarito and his corner right now, for the record -- I am simply stating that with what we've been told so far, this is an ugly case that won't soon get better for those involved.

It casts a pall over Margarito's reputation, over his past wins, and over his future right now. This is serious as a heart attack, and I hope we get some real answers. For Margarito's sake, I hope the answers aren't as bad as they look to be right now.