The tragedy of Collins and Resto, and what it could mean for Margarito

Share All sharing options for: The tragedy of Collins and Resto, and what it could mean for Margarito 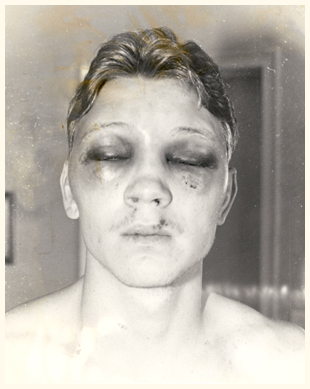 For anyone that thinks people that are concerned are maybe getting a bit too crazy about the Margarito wraps controversy, tell Billy Collins Sr. about it. I know I said the other day that we "didn't have to" get into this again, but maybe we do. Maybe it's best to bring up the horrible, tragic story of this infamous fight.

Just under 25 years ago, his son, Billy Jr. (pictured right), died near Antioch, Tennessee, when he drove his car off of a cliff. The unbeaten prospect hadn't fought in nine months, because he couldn't fight anymore. Nine months earlier at Madison Square Garden, Collins had been beaten so severely that the injuries suffered in the fight ruined his eyesight and halted what had been a promising career.

Resto so thoroughly battered Collins that it still strikes me as almost inhuman that Collins survived the fight without being knocked out. If you really want to see the fight, which is hard to watch, it is available online. Perhaps to truly understand the weight of the issue in the ongoing case, it has to be seen.

After the fight, Collins' dad, Billy Sr., went to shake Resto's hand, and immediately noticed something wrong. He held on to Resto's glove, as Resto tried to shake Collins' grip loose.

"All the padding's out of the goddamn glove!" the senior Collins shouted.

The New York State Athletic Commission seized the gloves, took them in for evidence, and soon enough, the verdict came back: Luis Resto and Panama Lewis were found guilty of tampering with the gloves, removing padding from each hand.

On July 1, Panama Lewis had his license revoked in the state of New York, and he never had an official role in another American fight. Resto was suspended for a year, and he never fought again.

In 1986, both Resto and Lewis were put on trial, and both were convicted of assault, conspiracy, and criminal possession of a weapon. Each man did two and a half years in prison.

Lewis to this day maintains that he didn't do anything, and that he's been banned unjustly for all these years. Resto, meanwhile, has lived rent-free in a basement of a boxing gym in New York, and after 15 years of efforts to get his license back in the state so that he could work corners, he was allowed to do so.

The former pug, now 48 years old, revealed in 2007 that not only had Lewis removed padding (and that he was aware of it), but the trainer had also soaked Resto's handwraps in plaster. The effect was, essentially, what Billy Collins Jr. reported during the fight: it was like he was being hit with bricks. The hand wraps had never even been investigated.

Resto went to the home of Collins' widow to apologize to her, saying he had been burdened by guilt for 25 years. He also admitted the full story of what had happened, including the plaster treatment of the wraps. He visited Collins' grave and said, "I'm sorry for what I did to you."

He also said it wasn't the first time that Lewis had tampered with his gloves.

Speaking with Wallace Matthews of Newsday, Billy Collins Sr. gave a rare interview yesterday. In it, he said the following:

"Shane Mosley was a lot luckier than my son was. At least they found out before the fight. Before he got hit with anything."

"I knew Margarito was doing something. Cotto was beat up worse than my son was. He was cut up all to pieces. You can't do that kind of damage with a glove."

Here's the real point when discussing this fight in comparison. It's true that right now we don't know for sure -- only the guys investigating at the CSAC, Margarito, and Capetillo know for sure.

Again, I hate this story. I wish we could all just move on and talk about what else is going on in the sport, and praise Shane Mosley for his win, and keep moving forward. But this is going to cloud the entire sport until February 10, when the CSAC holds its hearing.