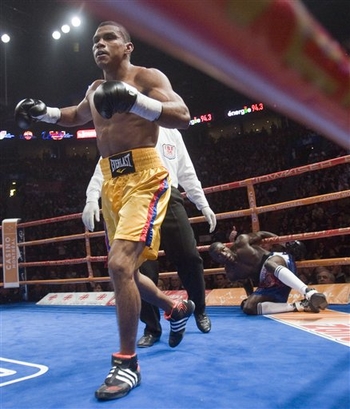 Though the scoring was weird and the referee was Marlon B. Wright, the biggest officiating goofiness of tonight's Friday Night Fights main event in Montreal came courtesy of the timekeeper.

Colombian Juan Urango beat Montreal resident Herman Ngoudjo by unanimous decision to win the vacant IBF junior welterweight title on scores of 116-110 (same as mine), 118-108 (a little wide), and 120-106 (bizarre). And even though Ngoudjo was decked twice in the third round by Urango, the key round was the 11th.

Five minutes and 10 seconds after the bell opened the round, another one finally sounded its end. That's 2:10 over the limit. That is bizarre and inexcusable. I've seen rounds go a little long; 10 seconds, 30 seconds, whatever. But an extra 2:10? Are you kidding me?

Montreal is a wonderful fight city with some of the best boxing fans on the planet, but their officiating up there has been way off the last two times there has been a major card. Letting fighters plod on for almost a full extra round is impossible to defend. Marlon Wright's crappy officiating in the Bute-Andrade bout last October was one thing, but this was just pure stupidity and a major cock-up by someone.

As for the fight, it was a pretty good one. Urango set the tone early by coming out and attacking with savage force, including the two third round knockdowns that I felt were easily the defining moment of the fight. Teddy Atlas had it closer than I did, but he also scored the first round 10-10 (I said it in the comments, and I do believe Teddy may be contractually obligated to chicken out once every main event and score a 10-10 round) and only gave Urango a 10-8 in the third, so whatever. Teddy halfway fell in love with what Ngoudjo did at some moments of the fight, but he also grabbed and held a ton. Urango let it happen and Ngoudjo definitely got the better of the inside fighting, but did he ever have Urango anywhere close to trouble? No.

I will admit a bias and say I just didn't care for Ngoudjo's performance at all tonight. Of his three biggest fights, this was easily his worst showing. He took Jose Luis Castillo and Paulie Malignaggi to the limit, but he did very little of note to Urango, at least in my opinion.

Truthfully, neither of them are ever going to be a truly top-tier fighter. Castillo was getting pretty worn out by the time Herman got to him, and I think the Malignaggi fight might have been a best possible effort from Ngoudjo. Malignaggi has off nights, but that really wasn't one of them. Ngoudjo just put him to the test and did a great job that evening.

This time, though, he allowed himself to be beaten by a fighter with a one-track mind. Urango's other big fight prior to this was against Ricky Hatton, who wasn't at his very best and barely dented Urango, but also showed how easily he can be beaten. Urango's hand speed is awful, he doesn't move at all, his defense is easy to break, and all he's really got is a solid chin and good power. They're great things to have, don't get me wrong, but an elite fighter he is not. Both are at the age where development past where they are is unlikely.

I'm not trying to harsh anyone's buzz, either. I'll watch Urango fight any day of the week, and I still like Ngoudjo. But they're B fighters, and I wouldn't be being honest with you if I discussed this fight without pointing that out. In the 140-pound division, they'll never be the top guy, though Urango's power makes him trouble for anyone but Hatton, really. I think eventually he cleans the much more athletic and skilled Kendall Holt's clock, for instance, if those two were to fight.

On the undercard, Montreal welter Antonin Decarie nearly wrangled a disqualifcation out of veteran Dorin Spivey, who took the fight on one week's notice, fought hard for about six rounds, and then went into the tank and held on as much as he could. Decarie's limitations are very obvious. You can glance at his record (21-0, 6 KO) and ascertain that he can't punch, and he can't. Spivey was undersized, in there without much time to prepare, and got hit with a lot of clean shots, but Decarie never really pushed him back.

Decarie has decent skills as far as the fundamentals go, but there's an obvious lack of athleticism that will keep him from becoming world class. He could be sort of like Yuri Foreman, perhaps. As long as he doesn't fight anyone at the top level, he'll be fine. If he's content as a regional star in Quebec, all the best to him. But if he ever tested himself against someone on the level of today's top six or seven welterweights, he'll get outclassed.

In the TV opener, Polish cruiser Lukasz Janik stopped Martin Hudon in the fourth round of a scheduled four. Janik is now 12-0 with six knockouts. He is built like the proverbial brick shithouse, though not moreso than Urango, whose build sort of defines that.

Shane Mosley was on the air between the first two fights to speak with Brian Kenny, and he noted that he also saw the controversial handwraps that are still in question before his fight with Antonio Margarito. Shane said that to him, it looked like a normal "knuckle pad," but that his personal doctor said it looked like a plaster substance was on there. Nothing new except I'm not sure we'd heard yet that Shane had also been there for the whole thing.

They also aired more of that Margarito sit-down interview, and I have to admit I started feeling bad for Margarito. Antonio seems genuine in denying any guilt, but that's just perception and a gut feeling. I have no clue, really. We'll find out; I'd say "we'll find out soon enough," but it's not soon enough. The California State Athletic Commission should get this the hell over with ASAP.

Mosley also said if there was a substance on the gloves, he thinks Javier Capetillo should be punished, but not Margarito. It's probably a fighter bond sort of thing that I couldn't really understand, as it seems like Shane wants to believe that his fellow boxer wouldn't do something like that knowingly.