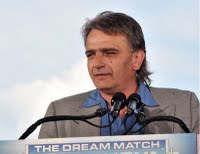 In what's turning into one of the more interesting subplots of the Pacquiao-Cotto matchup, there appears to be rising tensions in the Pacquiao camp due to severe disagreements between Pacquiao trainer Freddie Roach and Pacquiao's Canadian advisor Michael Koncz.  While there have been past rumblings that some members of Pacquiao's camp (particularly Buboy Fernandez) don't get along with Koncz, this is the first time he's publicly appeared to be a distraction.  The public story first came to a head a few days ago when Koncz told the Philippino press that he recommended that Pacquiao cut Roach's salary, and intimated that he wants Pacquiao to rid himself of Roach completely:

"It's an unnecessary expense at this juncture of Manny's career. He doesn't need Freddie. Freddie needs Manny."

"I told Manny that he trains himself anyway so why pay Freddie so much money. I am always looking for ways to save Manny money and that expense is unjustified."

I can understand Koncz wanting to save his client some money, and a training fee of greater than $1 million would be off market, but to say that Manny doesn't need Freddie is pretty ridiculous and shows how aloof Koncz may have become.  Common wisdom dictates that Freddie Roach helped turn Manny Pacquiao into the dominant fighter he is today.  When they first joined forces, Manny was a one-handed raw puncher with gaping defensive holes and little idea how to set up his huge, winging shots.  Today, he's not only a complete fighter, but he's still showing that he's technically improving from fight to fight, which is something that almost certainly wouldn't be happening without Roach.  Sure, Manny seems to be an incredible learner, but to learn, he needs someone there to teach.

Now, it appears that Koncz is trying to do a bit more than just advise Pacquiao.  While some of Manny Pacquiao's sparring partners have been provided by Roach (including Urbano Antillon and Shawn Porter), it appears that Koncz has been bringing in some sparring partners of his own, and they're not the right sparring partners for a Cotto showdown.  The primary sparring partner in question is Jose Luis Castillo, the once-great fighter who's been on the comeback trail, but who hasn't looked anything like an elite fighter for many years and whose best days were spent at lightweight.  Said Roach, "Why would I use Castillo? I can’t use a shot fighter to get Manny ready for Cotto."  And Freddie is dead on here.  Castillo doesn't have great relfexes anymore.  Castillo was never a vicious body puncher.  Castillo doesn't appear to have carried up power to welterweight.  At this stage in his career, Castillo would get absolutely murdered by either Cotto or Pacquiao.

Here's something Roach said about Koncz all the way back in 2006:

This guy is a real degenerate," Roach said. "He is a leech in every sense of the word. He claims he played pro hockey. He claims he is a lawyer. Then he says he was a law clerk. He went bankrupt with the Ibeabuchi thing, or so he claims, and he is in bankruptcy now. He lost his house in Orange County and I hear his wife and kids had to go back to Canada.

"But the guy definitely weaseled his way into Manny's life. He speaks as much Tagalog as me, meaning not a word. The guy is sleeping on the floor in Manny's bedroom. Manny now sleeps in a bed but this guy is right there when he goes to sleep and right there when he wakes up," Roach said. "He stays with Manny 24/7. I know this character and he is only looking out for himself.

Seems awful prescient now.  Koncz is recommending that Manny get rid of Freddie Roach?  Maybe Koncz should just be thanking his lucky stars that Pacquiao hasn't kicked him to the curb.