Brick has handled the last few of these, but October is a three-fight race, and they are all legitimate Fight of the Year contenders. After a year with plenty of good fights but only a couple of truly great scraps, October served up a killer menu of wars in what was easily the most action-packed boxing month of 2009 (so far).

Here are the three contenders for October Fight of the Month, in dated order. 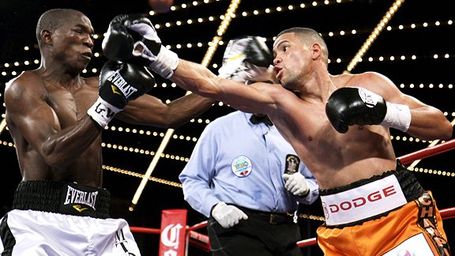 Puerto Rican phenom and 122-pound titleholder Juan Manuel Lopez took his spotless record and string of dominant performances to New York City for a fight with rugged veteran Rogers Mtagwa. When the bout was first signed, many fans groaned. Lopez was even unhappy with the fight, as it was hardly the step up in competition he probably wanted.

But there remained the slight chance that Mtagwa, who is miles better than his record, would give Lopez a game fight. It was more than that. Mtagwa came damn close to stopping the young fighter in what would have been the easy Upset of the Year.

Not only did Lopez survive, but in many ways he proved a lot more about himself than we knew going in. We knew his offensive firepower, but we'd never seen his chin tested. Mtagwa rattled him, nearly stopped him in the 12th, and had him in trouble on multiple occasions. But Lopez did not buckle. If there were any doubts about his chin, those are now finished. He's got a good one.

In the end, Lopez took a deserved decision victory, but it was by far the toughest fight of his professional career, and dented his armor somewhat. It also appears to have bought another money fight for the suddenly very highly-respected Mtagwa, who has now been in a FotY contender in two straight years. In January, Mtagwa will likely fight featherweight titlist Yuriorkis Gamboa, on an undercard featuring Lopez's jump to 126 pounds to meet Steven Luevano. 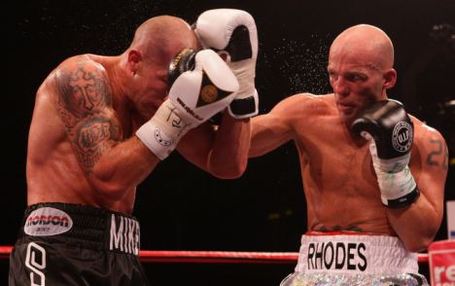 The fans in the UK were excited for this one, and their excitement was well-rewarded. Salford action star Jamie Moore put his European junior middleweight title on the line against a revived Ryan Rhodes, a veteran who had held the British title at 154 way back in 1996, just after he turned 20 years old.

It was a long trip for Rhodes to get back here, with plenty of falls and a career that at one point was very much on the rocks. But with his rousing comeback victory over Moore, he's now the WBC's mandatory contender as well as European champ at junior middleweight.

It started as many expected: Moore dominating, bullying Rhodes around the ring for about three rounds. At the end of the fourth, the fight changed. Moore was clearly rocked and went back to his corner in rough shape. But Moore rallied to win the fifth and sixth rounds, and had Rhodes in big trouble in the latter frame.

But the seventh round was the end of the night. Rhodes landed a massive right hand that sent Moore backwards, then his legs buckled and down he went. The courageous Moore got back to his feet and attempted to fight on, but the veteran Rhodes put the charge on, and referee Howard John Foster called a stop to the action. Ryan Rhodes had his hand raised after a stunning TKO victory.

After the fight, neither man took anything away from his opponent. It was an stirring performance by Rhodes, a game effort by Moore, and when all was said and done, they were class professionals. 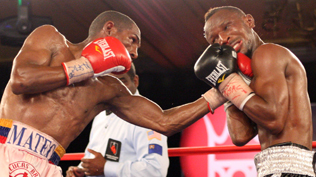 A promising fight turned into a non-stop battle between two guys at the top of their game in the bantamweight division. I said in a previous comment that after this fight and Agbeko's decision loss, boxing didn't lose anyone from the top tier, it simply added another fighter, and I truly believe that. Joseph Agbeko is still one of the very best at 118, a tremendous division at the top of the ranks. And Yonnhy Perez has joined that group after this incredible performance.

The controversy from the fight isn't really controversy at all. Agbeko can complain all he wants, but the headbutt that knocked him down was his own fault and didn't really play that much into the fight anyway. Many had it very close, but I felt Perez clearly won, and the three ringside judges agreed -- not that I'm saying ringside judges get everything right, or that I do either, but Yonnhy, in my view, just beat Agbeko at his own game on this night.

Sure, it got a little dirty in there, but it always does when Agbeko fights. He's like a little Evander Holyfield. Good as he is, you know what you're dealing with, and it's not always nice. Perez proved himself as a top fighter, and Agbeko proved that his reputation for having great stamina is certainly no joke. Both men put on astounding performances with their endless back-and-forth pressure fighting, toe-to-toe exchanges, and constant action. It was one of those fights that just flies by, and it's almost a shame someone has to lose, because the stock of both men was raised as far as I'm concerned, and I'm surely not the only one feeling that way.

So now that that's done, get to votin'!