In preparation for this weekend's super fight between WBO welterweight titlist Miguel Cotto and world junior welterweight champion Manny Pacquiao, Bad Left Hook will look back on the major title fight histories of both men.

Pacquiao's is very interesting (and perhaps a bit more limited than you might expect, as he wasn't always fighting for major titles), and Cotto's is really strong, and might hopefully wake people up to the fact that maybe, just maybe, Miguel Cotto isn't some schlub that the mighty Pacquiao will bulldoze past.

We are considering only fights for the Ring Magazine championships, as well as the titles of the WBC, WBA, WBO and IBF.

Cotto was 20-0 at the time, and the Brazilian Pinto was a perfect 21-0 with 19 knockouts. Also take into account that Pinto had twice beaten Cotto when the two were amateurs, and this one was no gimme. Pinto, a shade under six feet tall and huge at 140 pounds, was ripped to pieces by the Puerto Rican machine. He was wobbled early, knocked down in the second, and when he was floored again 32 seconds into the sixth round, his corner mercifully halted an entirely one-sided beatdown. Pinto landed 11% of his punches in the fight and could stop nothing Cotto threw at him.

For those that think Cotto's post-Margarito career is what it looks like when a guy has been beaten up bad and "lost it," it's not. It's Pinto after Cotto. The Brazilian fought four more times, winning three of them against guys who had a combined three fights between them, and losing a technical decision to Vince Phillips. Pinto's last fight came in 2006.

Bailey, who's still around with his cannon right hand keeping him in the game, was stopped on cuts. Cotto put him on the canvas twice. Bailey's never had a chin, and like Pinto he couldn't find any way to slow Cotto.

A more contested fight than Pinto or Bailey, as Corley came out and traded shots with Cotto early. Corley disputed the fifth round stoppage, saying it was early. Both fighters were docked points for low blows and Corley hit the canvas three times. Corley's complaining about the stoppage is also a bit questionable itself, as he willingly took a knee under heavy assault, which prompted the referee to stop the bout.

Abdullaev was another old amateur foe of Cotto's. The former Olympic gold medalist took Cotto out of the competition in the first round at the 2000 Olympics in Sydney. As with Pinto, Cotto got his revenge in the pro ring. Abdullaev had some success against Cotto, but ultimately had his eye swollen so badly that he couldn't continue. 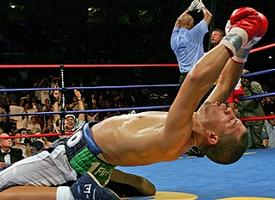 In my view, the most underrated, overlooked great fight of the decade. Sure, those that saw it know it's a great one, but it rarely comes up too quickly when discussing the great scraps of the 2000s.

Cotto and the ultra powerful Torres went toe-to-toe in a vicious battle, and though Cotto had eaten some good leather from previous foes (particularly Corley and Abdullaev), he had never faced someone as strong or good offensively as Torres.

Torres went down on a left hook in round one, but roared back to start an assault that culminated with a knockdown of the Puerto Rican in round two. Cotto somehow survived the storm. A body shot knocked Torres down again in the fourth, and though the Colombian never stopped swinging for the fences, the momentum had absolutely shifted. Torres hit the mat again in the sixth, and for a fourth and final time in the seventh. An overjoyed Cotto struck the famous celebration pose in the photo to the right. It was a phenomenal fight, all action to say the least.

The Italian veteran Branco, 35 at the time of this fight, was mostly known in the States for giving Arturo Gatti a pretty decent fight in 2004. Cotto dominated seven rounds, and Branco pulled out 49 seconds into the eighth with a shoulder injury.

To be stereotypical, Paulie Malignaggi never looked like a tough guy, never really acted like one, and certainly didn't (and doesn't) punch like one, at least by pro boxer standards. But there's a lot more John Wayne in Malignaggi than meets the eye, and that's what we found out with this fight. Malignaggi wound up with a fractured right orbital bone and a pretty serious jaw injury, and overall took a fairly horrific beating from Cotto. But the New Yorker did not back down, and both men came out of an exciting, dramatic fight bigger stars than they were before. Cotto won an unanimous decision, the first time in a major title fight he was taken the distance.

We continue with Cotto's welterweight career after the jump.

Fellow Puerto Rican Quintana was unbeaten and coming off of a pretty big upset of Joel Julio, a red-hot prospect many expected would be a major star himself by now (he's not). With Quintana as one of the world's best welterweights and Cotto moving up in weight, there was some intrigue going on. Cotto punished Quintana early and often, and after a nasty fifth round body shot, Quintana decided to not come back out for the sixth, making Cotto a two-division titlist.

Veteran Urkal used every cheap trick in the book to keep himself in this fight, when it was clear to anybody watching that he was hopelessly outgunned. The fight was rather kindly stopped in the 11th round, getting an inevitable result over with. Cotto led 100-89, 97-92 and 98-91 on the official scorecards. Urkal didn't come to win, he merely came to exist and cash his check.

One of the better fights of 2007, and the last time Judah showed any real guts in the ring. Cotto's reputation for being a dirty fighter largely stems from this fight, as he popped Judah with some pretty wicked low blows in the first and third rounds. Judah had wobbled Cotto in that opening round, and that was his receipt. Judah hung around as long as he could, but eventually was overcome by the younger man. Cotto forced Judah to a knee in the ninth, when he knocked Judah down hard in the 11th, the referee stopped the fight. 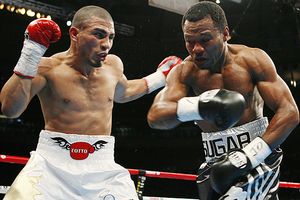 A spirited, super competitive fight between two men who gave their very best. Mosley was thought to have seen his best days go by him, but after two beatings of Fernando Vargas, he decided to drop back down to 147 pounds, and he made it clear he was far from finished. He gave the unbeaten Cotto as good a fight as anyone ever had, and lost a close but clear decision, on scores of 115-113 (twice) and 116-113. Cotto and Mosley looked like fighters that could have become great rivals, but it hasn't played out that way.

To be honest, a disgusting mismatch from the moment it was made, as for whatever reason Top Rank decided that Cotto needed an easier bout, and HBO approved Gomez, one would assume, because of his status as a popular fighter from "The Contender." What no one counted on was the fact that "The Contender" wasn't really that popular to begin with, and people certainly didn't stick around to follow the post-show careers of those pugs.

Gomez, who fights on the Cotto-Pacquiao undercard against Jesus Soto Karass, was game as always but frighteningly out of his league. Cotto stared him down at the end of round one and I remember being almost afraid for Gomez. The fight should have been stopped at least two rounds before it was. The fight shouldn't have even happened.

We all know this one, know how great a fight it was at the time, and know the asterisk it carries today. Let's leave it at that.

Cotto got a rebound fight with the unqualified Jennings, who had climbed the WBO's ridiculous rankings for whatever reason you may wish to assign. Jennings was a bit better a matchup than Gomez and a bit less of a stinker than Urkal, but he was no match for the world class fighter. Jennings did the best job he could staying away from Cotto early, but once Miguel found him, it was all over.

The people that spent all their time complaining that they felt Clottey won this fight missed a hell of a lot, I feel. First of all, it was a terrific fight, hard-fought on both sides. It made Cotto, who fought through a bad cut to pull out a tight win, look better. And it made Clottey look better yet again. Both of them had their A-game. I felt Cotto did enough to win, as did the judges.