In preparation for this weekend's super fight between WBO welterweight titlist Miguel Cotto and world junior welterweight champion Manny Pacquiao, Bad Left Hook will look back on the major title fight histories of both men.

This morning, we looked at Miguel Cotto. Now, a glance at Manny Pacquiao.

We are considering only fights for the Ring Magazine championships, as well as the titles of the WBC, WBA, WBO and IBF.

Really one of the more underrated wins of Pacquiao's long, amazing career. Sasakul was one of those Thai fighters whose resume wasn't the strongest in terms of opponents, but the man could certainly fight. After Pacquiao, he boxed another ten years (last fighting in November 2008), and never beat another major opponent. When interviewed by The Sweet Science, Sasakul remembered Pacquiao as the best puncher he ever faced:

TSS: You’ve fought in both boxing and Muay Thai and fought more than 150 times. Who would you rate as the best puncher you’ve faced?

Chatchai Sasakul: Manny Pacquiao!!! One good punch from him and I was out. He has very heavy hands.

TSS: What happened in that fight? You were schooling him until you got caught with a few good shots.

Chatchai Sasakul: I lost my focus I guess and he took advantage of it. I don’t remember much about that fight (laughing)!

Go back and watch this fight now. It's amazing for a couple of reasons. First, even though he hadn't really developed his body and was but a 20-year-old kid at flyweight, it's hard to not notice that Pacquiao was huge as a flyweight. It's again more incredible to me that he won titles at flyweight than it is that he won the championship at 140 when I look at him now and look back at him then. The second amazing thing: How limited Pacquiao was. He was a totally one-handed fighter, pretty bad defensively, and just raw as all hell. Mira (19-7-1, 15 KO coming in) got Pacquiao in some early trouble, but was banged out in the fourth under a furious Pacquiao assault.

Singsurat was Pacquiao's last fight at 112 pounds, and for good reason. Singsurat ran Pacquiao ragged, never relented on pressure, and knocked him out with a third round body shot. Manny was awful in this fight. I don't think this loss really means much of anything anymore. In fact, I don't think any of Pacquiao's losses really mean much of anything anymore. Pacquiao skipped 115 and 118, going straight up to 122. If you really think about that, a full three-class jump seems crazy, but it wound up working out OK.

Pacquiao's true coming out party. On the Oscar de la Hoya-Javier Castillejo undercard, Pacquiao took on the South African titlist Ledwaba and ripped him apart. Ledwaba was never the same after the loss to Pacquiao, although to his credit he hardly went to fighting a bunch of bums or anything. He took over a year out of the ring after losing to Pacquiao, after having fought in both February and April of 2001 before meeting the rising Filipino slugger.

A really dirty fight, with Sanchez getting docked two points for low blows. The bout was stopped after six on a Pacquiao cut, caused by an accidental headbutt in the second round and made worse with another headbutt in the sixth. Without the two points for the low blows, Pacquiao would have been dealt a loss here. The scores after six were 58-54 Pacquiao, 57-55 Sanchez and 56-56. Even one of those points back would have given Sanchez a win.

"This is some prospect, Bobby. To me he's every bit as exciting as Prince Naseem Hamed." -- Jim Lampley, 2002

Pacquiao was featured on the Lewis-Tyson undercard with this fight, a pretty heavy beating of a veteran contender. Julio was on the downswing, having lost to Johnny Tapia and Adan Vargas in recent fights, and Pacquiao destroyed him. Julio would fight once more, losing a 10th-round TKO to Israel Vazquez in 2003.

We get into the meat of Pacquiao's title fight career after the jump.

The 27-year old Rakkiatgym was one of those Thai fighters who had no resume, had never beaten anyone, and never did beat anyone. Pacquiao knocked him down four times. There appears to be some sort of minor urban legend that Rakkiatgym died after the fight, but he, uh, did not. He fought on until 2006, when he lost to Valdemir Pereira. 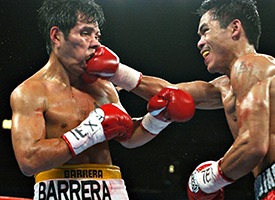 Ring Magazine champion Marco Antonio Barrera was the favorite in this fight. Sure, Pacquiao had a chance, at least a puncher's chance, but the veteran, in-prime, established Barrera surely would be too wily for Pacquiao. After all, he'd kryptonited Hamed already, and beaten his rival Erik Morales.

Pacquiao had other plans. It was without question the worst beating Barrera ever took in his career (hopefully that won't change). His corner stepped in to stop the carnage in the 11th round. Pacquiao was leading 97-90 (twice) and 97-89 on the official scorecards.

Marquez went down three times in the first round, but miraculously and courageously battled back to outbox Pacquiao for the majority of the last 11 rounds. It was an epic fight, heroic on Marquez's part, and was really the final time we'd ever see Pacquiao so outclassed for any real length of a fight.

Yep, it took four years and the same opponent for Pacquiao to fight for a recognized major title again. Another toe-to-toe battle that saw Marquez climb off the canvas and arguably beat Pacquiao. But Pacquiao won a contested split decision in a fight that would have been Fight of the Year in most years, but had to contend with the first two Vazquez-Marquez fights in 2008.

Pacquiao moved up to 135 pounds and put the leather to David Diaz, who gave it his all but was badly outclassed in speed. One of the popular quotes that has gone around since this fight, alleged to be such a mismatch and discredited by a few, is that David Diaz came closer to beating Pacquiao than would Oscar de la Hoya and Ricky Hatton. It's true, too.

Ricky Hatton was in shape, still in what should have been prime years, and hadn't taken too much punishment over his career. No, he didn't move his head like he should have, and the talk has always been that he just didn't follow Floyd Mayweather Sr.'s gameplan. But that takes nothing away from the one plain fact: Pacquiao ran Hatton over with brutal force, putting him on the canvas twice in the opening round and knocking him out near cold in the second round.