We continue our tour of the admittedly not-so-impressive Cotto-Pacquiao undercard with the bout that will immediately precede the main event on Saturday, and is an attempt to grab some buys from the Mexican fight fan community, which is large and loyal. 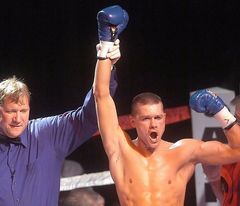 Let's not beat around the bush, because as much as I want everyone to order this card, this fight deserves to be called exactly what it is. By sticking the frequent "Latin Fury" PPV headliner Chavez on the card, Bob Arum is surely hoping to grab some undecided Mexican buys in PPV land by throwing on a favorite son. There's nothing wrong with that. In fact, it's good business.

And as much as I want to root for Troy Rowland because he's a Michigan guy just like yours truly, it'd be folly to consider him anything more than a hand-picked opponent trekking to Vegas to lose to Chavez. That's not disrespect; that's truth. Rowland beating Chavez might not send shockwaves through boxing, but would be the 2009 Upset of the Year, I think, even considering all factors.

What are those factors? First of all, Chavez just isn't all that good. That's also not disrespect, and it's not truth either. That's an opinion. I have nothing against Chavez, whose career is built on his father's name, but really, that's no big deal. Fact is, Chavez being limited has made for some quite exciting fights in his babysteps-filled rise to prominence. At 23, he's already been in the ring with plenty of guys better than Rowland, such as Ray Sanchez and Matt Vanda, and neither of those guys (or the scores more like them on Chavez's record) are exactly world-beaters.

Second, Rowland basically defines "club fighter." He's 34 years old and has fought outside of Michigan twice in his career, and both of those fights were in LaPorte, Indiana. For those not familiar with the terrain, that's just south of the Michigan border in northwestern Indiana. Not exactly a major change of locale.

Chavez isn't a contender yet. Even with 40 wins and just the one draw, he remains a prospect more than anything, though you can also easily say he's pretty much a finished product. He's not his father, and he never will be. But he could still have a damn fine career even without ever being his father. Few ever have been his father. 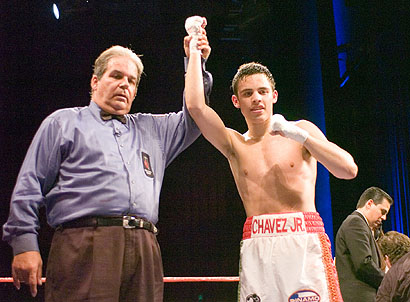 Chavez's Best Win: JCC Jr. has beaten a lot of guys on roughly that same level of journeyman or will-be journeyman. I think his best win is Ray Sanchez. Sanchez led on two of three cards after five rounds before getting knocked out in the sixth. Chavez showed an ability to fight back with some adversity. There's also his rematch pounding of Matt Vanda, who gave him all he could handle and more the first time they met. That showed an ability to adjust by Chavez. He was much, much better in the rematch.

Rowland's Best Win: Rowland climbed off the canvas to outpoint strong veteran Epifanio Mendoza in 2004. Past that, you might also recognize Charles Whittaker's name. Whittaker's last loss came in 2004 to Rowland, who won on very narrow scores (96-94 twice and one card a 95-95 draw) with a distinct home field advantage. Whittaker nearly fought Vernon Forrest last year before the plug was pulled on that show, which at the time most felt was a disgusting mismatch in Forrest's favor.

Streaks: Rowland has won four straight since being knocked out by Fernando Zuniga in 2005. He fought twice more in '05 before taking three and a half years off. The only blemish on Chavez's record came in 2005, a six-round draw with Carlos Molina. Chavez immediately rematched Molina and beat him. He's working on 17 in a row.

Prediction: If you haven't guessed by now, Chavez should rightly smash Rowland. I don't think this one will get past five rounds or so. If anything, Rowland is a step down in competition from the likes of Vanda, Luciano Cuello and Jason LeHoullier. Chavez stopped LeHoullier in 2:43 his last time out, and a repeat of that would hardly be a shocker.