Team Cotto has no doubts Margarito loaded gloves in 2008

Share All sharing options for: Team Cotto has no doubts Margarito loaded gloves in 2008

Lance Pugmire of the Los Angeles Times has a really intriguing piece up about Miguel Cotto's lone career loss, the devastating 2008 defeat at the hands of Antonio Margarito.

This subject recently came up again on Bad Left Hook, and it's something that will never go away without an admission of guilt, if Margarito is guilty of anything. But Team Cotto -- including Miguel, his father Miguel Sr., and his trainer Joe Santiago -- are now saying they're convinced that Margarito had loaded gloves. Margarito and trainer Javier Capetillo were caught attempting to load the wraps with a plaster-like substance in January, in the dressing room prior to Margarito's fight with Shane Mosley. Maragrito and Capetillo both had their licenses revoked shortly after, and are eligible to be reinstated early next year.

Miguel Cotto glanced at the photo. He'd already seen it and had drawn a conclusion about what it indicates.

Cotto and his advisors say that a photograph recently obtained by The Times represents what his father, Miguel Cotto Sr., calls "overwhelming" evidence that his son's 2008 opponent Antonio Margarito used illegally hardened hand wraps to help him score a technical knockout over the previously unbeaten Cotto.

"The only people who can tell you for sure if those [inserts] were in there is Margarito and his trainer, but you have the picture now, so people know," Cotto said.

I think the photo in question is the one to your right on this post, or one of exactly the same thing. It's another thing that has been brought up a lot, especially in recent months. What's with the wraps? What's the tear above his knuckles? What's with the discoloration by the pinky?

Margarito's co-manager, Sergio Diaz, reviewed the photo obtained by The Times and said the discolored portion probably came from red dye in Margarito's gloves bleeding onto the wraps.

"That color is like the color from the gloves that are on his wrists after a fight," Diaz said.

Diaz said Margarito denies any wrongdoing in the Cotto fight or the Mosley pre-fight incident.

But Keith Kizer, executive officer of that commission, said Margarito never turned over his hand wraps to Nevada authorities, and wasn't asked to.

This clears nothing up. Of course the Margarito side denies it. They're trying to get him a license to fight in the States again. He's still a young man and has a lot of miles left on the odometer, at least that would be their hope.

Santiago is referencing this: 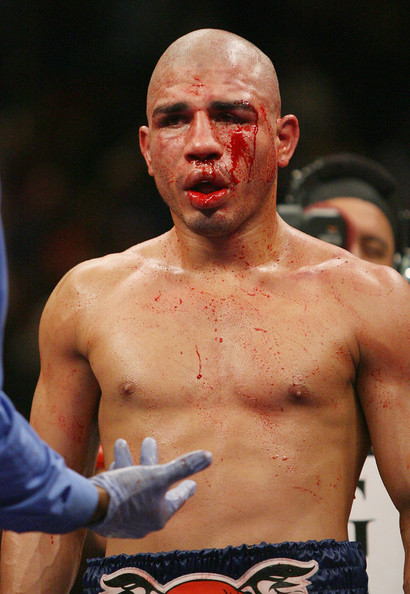 Now you might say, "Well, that was Margarito, not those other guys." Fair point -- if one assumes that Margarito was clean.

One of our longtime commenters at BLH brought up in the FanPost I linked at the beginning of this article the idea of getting caught drunk driving not meaning you drove drunk every time; that Margarito being caught red-handed, so to speak, against Mosley doesn't mean that he did it in all of his other fights, and that his career shouldn't be disregarded.

But let's be serious, too: Chances are if you got caught drunk driving, it wasn't your first time. You got away with it before. (Don't drink and drive -- seriously, idiots.) The first time I was caught drinking underage wasn't the first time I drank underage.

It almost surely wasn't Margarito's first time, either. I don't think they suddenly decided he needed to go that route as the world's No. 1 ranked welterweight, unless of course they were looking desperately for any advantage. Margarito has said numerous times that he wasn't in good shape for the fight. But it's just a coincidence that he wasn't in shape and got caught looking for an advantage. And he didn't know it was happening. Just evil genius Capetillo putting a fighter's career in grave danger for ... what reason?

Right, well, I've got a bridge to sell you if you're still buying that one.

You want my gut feeling? He was loaded. That's not me trying to convince anyone else or rally anyone for a cause. At the end of the day I don't much care how anyone else feels on the matter, agree or disagree. I have my own opinion on this, and it's not changing unless something hugely convincing comes out. For even trying to do it once, Margarito deserves every insult he gets from every boxing fan, fellow boxer, boxing journalist, or anyone else. And his career is forever and totally tainted. It's not a forgivable sin in boxing. It's just not.

Despite the Cotto team's strong statements, though, Margarito and Diaz are remaining "optimistic":

Margarito is working out lightly in Mexico, and Diaz said, "We're taking steps to getting our license back."

Bob Arum, who promotes both Cotto and Margarito, said, "The fight everyone would want to see is a Cotto-Margarito rematch."

"I know Cotto says Antonio won't make another penny off [him], but if he's offered a lot of pennies to take the fight, I think he will," Diaz said.

Speak for yourself, Bob. There are a whole lot of us who never want to see Margarito again, period.