For the Ages: Manny Pacquiao and Miguel Cotto Won't Disappoint

Share All sharing options for: For the Ages: Manny Pacquiao and Miguel Cotto Won't Disappoint

It was the first fight between Israel Vazquez and Rafael Marquez. On February 25, 2007, I wrote a preview trying to express properly how excited I was for that fight. I think my excitement comes across OK, but it still couldn't quite match what I was feeling.

I'm having the same problem for tomorrow night's fight between Miguel Cotto and Manny Pacquiao. There are so many ways this fight could go, but I cannot envision a single one of them resulting in a fight that is less than thrilling, no matter how long it lasts, who wins, whatever. It's going to be a great fight. These are two guys that are coming to seek and destroy, to not just stay at their current elite position in the sport of boxing, but to elevate where they're at.

And when the night ends, there's a damn good chance both of them will be elevated, too.

Fights like this don't get made often because boxing has over the years become a sport of marketing to a degree that it never has been before. It was always about business, don't get me wrong, but fighters now are so protected not just by their promoters but by themselves that we don't usually get matchups this promising. Floyd Mayweather Jr. is a great fighter, but he doesn't take fights like this one. Oscar de la Hoya was always up for a challenge, but as good as he was, he wasn't this exciting.

This is like a mix of Mayweather's ability to make you want to see a fight, mixed with Oscar's guts in taking on tough opponents, and then you sprinkle in the fact that both Pacquiao and Cotto are pure action fighters. Both very clever fighters, too, but when the chips go down, these are men that throw their hands.

A lot has been made of size. I don't think size will be a big issue. Cotto will probably outweigh Manny on fight night, perhaps by 10 pounds or so. But that won't be the reason the fight goes however it goes. Nor will it be Cotto's notorious dirty tactics. And it won't be Cotto's constant cut problems.

This fight will be won by whichever man is better. These are elite-level performers, both of them. Every guy on this level can fight his ass off, and should never be counted out.

Cotto-Pacquiao is the sort of fight that in anticipation, makes your heart rate climb. This is boxing nirvana. Great fighters, big names, a can't-miss thriller of a fight. And I realize what type of statement I'm about to make, and how bold it is, but I firmly believe the following to be true. If this fight maxes out its potential for action, drama and intensity, we're going to see the Fight of the Decade tomorrow night.

So who's gonna win this bad boy? I have no real rooting interest. This is too good for me to hold any fan grudges (not that I have any with either man).

I'll say this: I don't think Freddie Roach is crazy for seeing an early Pacquiao stoppage. If Manny can blitz Miguel from the opening bell, there's only so much that Cotto can do. Yes, Miguel is a strong, tough man, but Pacquiao comes with such speed and ferocity that he can be overwhelming for anyone, and yes, I mean anyone in or around the welterweight division, including Floyd Mayweather. Ricky Hatton is not a bum, and Pacquiao took him out without breaking a sweat.

It was because he came from these angles that Hatton never saw coming. Hatton was in shape, and even abandoning his gameplan he shouldn't have been crushed the way he was. It happened because Pacquiao was simply better than him, and had him reeling right away. It was similar with Oscar de la Hoya. Oscar didn't get knocked out, but referee Tony Weeks could have stopped that fight with no argument from anyone. He battered Oscar because Oscar couldn't find him, couldn't time him, couldn't anticipate anything he was doing.

Pacquiao has evolved into a fighter unparalleled in this way. Nobody else in boxing can do what he does the way he does it.

But don't think I'm counting out Miguel Cotto. Cotto's been through the wars, too. He took a hard beating from Antonio Margarito, and overcame a brutal cut this past June to narrowly outpoint a tremendously strong Joshua Clottey. He's also beaten Shane Mosley and a Zab Judah that actually came to fight, not to mention his many solid conquests at 140 pounds. 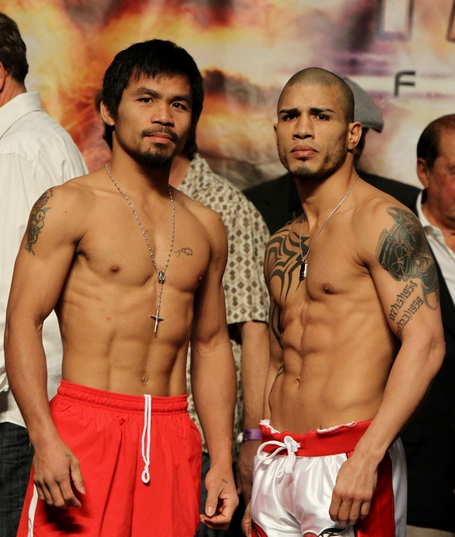 He's been down. He's gotten up. He's taken massive shots. He's gotten past them. The only man to ever beat him was a guy with a jaw made of stone -- I don't care what you (or I) think about Margarito at this point, or even as pertains to that fight. A lesser-chinned man goes down against Cotto that night. Cotto was locked in until Margarito caught up to him, and that only happened because Margarito takes a punch as well as anybody.

Pacquiao hits hard. I don't think his power is a detriment at 147, especially when you combine it with his speed and accuracy. But does he hit harder than Margarito, Mosley, Clottey, or the missile-throwing 140-pound Ricardo Torres? I don't see it.

Cotto's neutralized speed before, and he can do it again. Pacquiao has beaten some great boxers before, and he can do it again. Pacquiao's also been toe-to-toe with some really tough guys, including Juan Manuel Marquez, Erik Morales and Marco Antonio Barrera. They were all smaller than Cotto, but no one was questioning Pacquiao having some great size advantage over them at the time, or anything like that. We just saw Marquez try to fight at this weight. Not so hot. Pacquiao would have knocked that Marquez out within five rounds.

That Pacquiao has carried the weight so well is amazing, but there's no size excuse for this fight. He is this size fighter, so is Cotto. Plain and simple. I almost don't want to make a pick, because I'm not sure how much I care who wins. I just want to see this. This is a fight that no boxing fan on earth should miss.

I'm picking Manny Pacquiao to win this fight. And I wouldn't bet a dime on it.