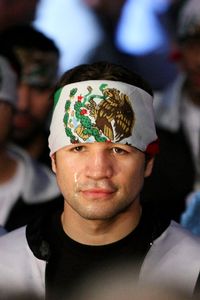 Former "Contender" star Alfonso Gomez won a decision over Jesus Soto Karass in the opening fight of the Cotto-Pacquiao card tonight in Las Vegas. The fight was stopped with 46 seconds left in the sixth round, with Gomez unable to see out of his left eye. A headbutt had opened the wound early in the fight, and as the battle wore on, it became too much.