Share All sharing options for: Super Six continues with Kessler-Ward on Saturday 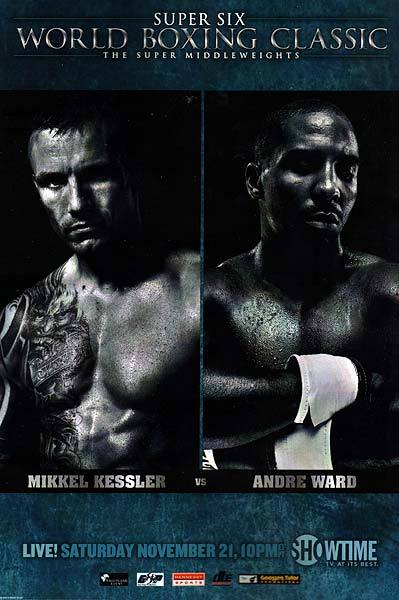 While the focus of the boxing world is and will remain Manny Pacquiao and Floyd Mayweather Jr., there is a whole great big global sport out there that's going to keep happening in the meantime, and a lot of fantastic fights on the docket right now.

One of those is happening Saturday night in Oakland, the final fight of the Super Six World Boxing Classic's first stage. On October 17, we saw Carl Froch controversially outpointed Andre Dirrell, and we saw Arthur Abraham knock Jermain Taylor out cold. The first fight of the tournament on American soil has a lot of intriguing qualities, too.

For my money, Kessler (42-1, 32 KO) remains the world's best super middleweight. His only loss came in 2007 to Joe Calzaghe, the retired champion of the division (and later at light heavyweight), and a man whom Kessler tested like only a couple of other guys ever really did. The Dane hasn't become a major star yet, but that's part of what this tournament is about. Taking these fighters and giving them a chance to break out on the global stage.

But really, I'd be lying if I said I wasn't more interested in 25-year-old Ward (20-0, 13 KO). Ward is a former Olympic gold medalist, and when he was going for the gold, I rooted for him heavily. I'm not the biggest fan of Olympic boxing (OK, I hate Olympic boxing), but Andre made some statements in 2004.

Since turning pro, he's moved at a steady pace. He's also suffered some knee injuries that may haunt him forever, as knee injuries can be bad, bad news for any athlete.

This year alone, Ward has fought three times. He routed Henry "Sugar Poo" Buchanan in a stinker in February; a stinker because Buchanan refused to engage, protecting his reputation of having never been knocked down, "not even in the streets." In May, he moved up to face the always-dangerous Edison Miranda, and like the other good fighters Miranda has faced, Ward made the Colombian slugger look more housecat than panther. In September, he tuned up for Kessler by demolishing poor Shelby Pudwill.

But for all his natural talent, including a great ability to switch between orthodox and southpaw stances, I've just personally never been terribly impressed with Ward. I don't know why, either. He's got power, he's got speed, he's pretty smart for a guy with his experience. He's always been a lot more humble than his "Son of God" nickname. I've never disliked him. I've just never gotten fully on board.

Saturday, that can change. If he beats Kessler, welcome to the elite class of the sport, Andre Ward. If he makes a good showing and loses a tough fight, he's more than proven himself a legitimate contender.

Once again, Ward will also be fighting for the reputation of the United States. It's not quite the Olympic level, but so far the Americans are 0-2 in this tournament, and Jermain Taylor seems likely to drop out entirely. Ward and his old Olympic teammate Dirrell both took sizable risks getting into this tournament. Today, fighters with their pedigrees often stay protected longer than this.

I can't help but admire the guts of both. And I'm hoping that my likely irrational lack of any real feeling toward Ward will dissipate after a great performance, win or lose. He'll be in there with the best.

We'll have more on this fight in the week to come.