Share All sharing options for: TV and Internet Fight Schedule - Weekend of November 20 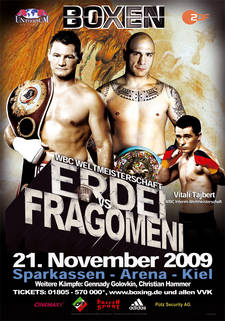 In the aftermath of Pacquiao-Cotto, there's actually quite a bit going on this weekend, although nothing that rivals last weekend.  There are two major cards, including the second leg of the Super Six tournament, although the other big card (with three title fights) won't be aired in the U.S.

Sky, 5:00 p.m. Eastern, Rendall Munroe vs. Simone Maludrottu.  This one's a title eliminator at 122.  Munroe has been on a decent run lately, including two wins over Kiko Martinez, while Maludrottu was basically gifted the spot due to moving up in weight after getting his butt kicked by Hozumi Hasegawa.

Azteca America, 8:00 p.m. Eastern, Jose Emilio Perea vs. Julio Camano; Wilbert Uicab vs. Job Solano.  This one's about on par with the Golden Boy Fight Night series. I believe the Campeon Azteca semifinals will also be aired (via tape delay) on this card.

Telemundo, 11:35 p.m. Eastern, Wilfredo Vazquez Jr. vs. Genaro Garcia.  Garcia should be quite the challenge for Vasquez.  While he's 1-3 in his last 4, and his best days were one weight class lower, he's still a three-time title challenger and has some good wins on his record, including a dominant win over Miguel Roman earlier this year.  Nice to see that at least ONE son of a legend isn't just trying to piggyback off his father's name to make a living.

ZDF, 5:15 p.m. Eastern, Giacobbe Fragomeni vs. Zsolt Erdei;  Humberto Mauro Gutierrez vs. Vitali Tajbert; Dmitri Sartison vs. Stjepan Bozic.  Officially, all three of these are title fights, although Gutierrez-Tajbert is for the interim title held by Humberto Soto, and Sartison-Bozic is for an invented title that came to be when Mikkel Kessler was recently promoted to "super" champion.  Fragomeni, a 40 year old with a decent workrate but little power (sort of an Italian poor man's Glen Johnson) is probably the weakest of the cruiserweight titlists, and thus Universum is moving him up a weight class rather than having him face more popular stablemate (and now full light heavyweight titlist) Jurgen Braehmer.  At the very least, Erdei's stranglehold on the light heavyweight lineal title is over, meaning that there can hopefully be some action to determine a real light heavyweight champ sometime in the near future (probably after Hopkins officially retires).  Gennady Golovkin was also originally scheduled to face Ishe Smith on the card, but Smith got injured.

HBO Plus (Latin America), 7:00 p.m. Eastern, Jorge Barrios vs. Michael Lozada.  Lucas Matthysse and Sebastian Lujan will also fight (not each other) on the undercard.

Prizefighttv.com, 8:00 p.m. Eastern ($4.99), Shawn Porter vs. Jerome Ellis; Tyrese Hendrix vs. Martese Logan; Dominic Wade vs. Bradley Thompson; Farah Ennis vs. Anthony Doughty.  Porter's first fight since serving as Manny Pacquiao's primary sparring partner should be a gimme, but should get Porter some rounds.  Ellis is 1-5-1 in his last seven (with all five losses coming to decent names), but was not stopped in any of them.

TyC Sports (Argentina), 9:00 p.m. Eastern, Marcos Rene Maidana vs. William Gonzalez.   Maidana will defend the interim title he won by defeating Victor Ortiz.  Good for him to stay busy, even if he lost out on a potential HBO fight.If you're interested in this fight and the Barrios fight, I'd recommend checking out great Argentine fight blog Boxeo Hoy.

TSN (Canada), 10:30 p.m. Eastern, Marvin Sonsona vs. Alejandro Hernandez, Steve Molitor vs. Jose Saez.  My personal favorite young fighter makes the first defense of his super flyweight title at Casino Rama, where he won the belt.  Seems like an odd place to try to build up a fan base.

Showtime, 10:00 p.m. Eastern, Mikkel Kessler vs. Andre Ward.  Bad Left Hook will be providing round by round coverage.

Elsewhere in the world of boxing....