Share All sharing options for: Cotto-Pacquiao destroys Mayweather-Marquez at the gate 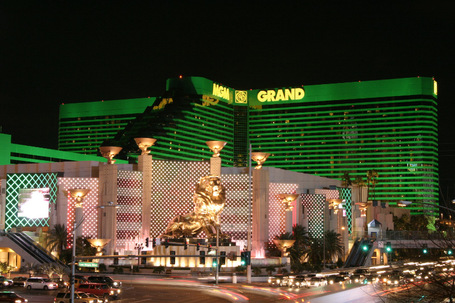 USA Today's J. Michael Falgoust reports that the November 14 fight between Miguel Cotto and Manny Pacquiao was a big live success in Las Vegas, blowing out the Mayweather-Marquez fight from September in money drawn at the gate and tickets sold.

The gate from last weekend's showdown between Pacquiao and Miguel Cotto— which will air on HBO Saturday (10 p.m. ET/PT) — was $8.84 million with 15,470 tickets sold.

That's 3,500 more tickets sold and $2 million more than what Mayweather's comeback from a near two-year layoff drew when he fought Mexican Juan Manuel Marquez in September on Mexican independence weekend.

And then there's PPV, which will have figures released later today. The Mayweather camp is already excusing themselves from the comparison by saying that Pacquiao "had a dance partner," apparently operating now under the idea that Juan Manuel Marquez is a bum with no fans, while selling us beforehand on Marquez's ability to draw in the Mexican audience as one of the reasons they chose to fight him in the first place.

They'll go back to pointing at their better numbers with Oscar and Hatton, not acknowledging the fact that Oscar and Hatton were both better "dance partners" when Floyd fought them than when Pacquiao fought them, and that Pacquiao also fought both in a recession. And they'll say, "I did a million homes with Marquez! But guess what! Guess what! But guess what! Guess what! He only did 400,000," except they probably won't even say 400,000, they'll say something lower than that, which might mean that Pacquiao-Marquez at 130 pounds in 2008 is about equal to Floyd's riveting fight with Carlos Baldomir in 2006. But hey, who's counting?

Floyd and Manny have become big stars in pretty much the exact same way. They were both noted as great fighters, but as draws, they were what they were. Manny was pretty good for his size -- again, nobody has ever sold more PPVs at that weight or lower than Pacquiao-Marquez II sold -- and Floyd just never quite got rolling.

Oscar de la Hoya made them both PPV forces. They took that momentum and ran with it. Floyd did it with his personality first, and his great skill second. Manny did it with his ferocious performances first, and a personality second, a personality that is something that I think American fans are just in love with at this point. The casual boxing fans out there barely recognized in a pre-MP world that there are Filipino boxers, let alone this force of nature.

If you want to be black and white about it, and make it really, really simple, then let's say it this way: