Why Pacquiao-Mayweather needs to be in Vegas

Share All sharing options for: Why Pacquiao-Mayweather needs to be in Vegas 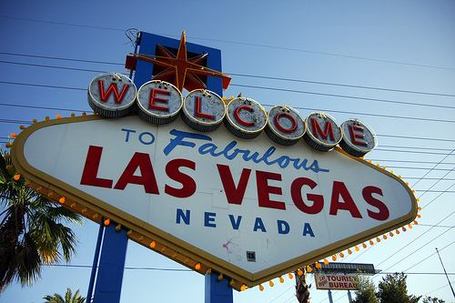 Lately, there's been a lot of noise that Bob Arum is putting out feelers to have a Pacquiao-Mayweather superfight in a location other than Las Vegas.  He's already spoken to Jerry Jones about using the Dallas Cowboys' stadium.  There have been some quieter rumors about looking at Wembley Stadium in the UK.  But at the end of the day, the fight needs to be in Vegas, and it has nothing to do with the fight atmosphere.

Mayweather and Pacquiao are both in it for the money

Heck, Mayweather even goes by the name "Money" these days.  Pacquaio often comes across as being a bit more altruistic, but he cares about the dollars as well.  He threatened to put the kabosh on his fight with Ricky Hatton until Hatton agreed to a 50/50 split of UK revenues.   And whoever promotes the fight, the promoter surely stands more to gain by having the fight in the most profitable location rather than the most significant location.  To figure out where the fight would be held, you need to follow the green brick road.

You can charge exorbitant ticket prices in Vegas

One great thing about the Nevada State Athletic Commission is that they actually publish all of their live gates, so you know how much a fight has made just off the ticket sales.  The all-time high live gate was Mayweather-De La Hoya, which brought in over $18 million in ticket sales.  Mayweather-Hatton brought in over $10 million.  Pacquiao-Hatton and Pacquiao-Cotto both brought in about $8 million.  This means that Mayweather-De La Hoya was able to average over $1,000 per ticket.  Even the lowest of these, Pacquiao-Hatton, averaged about $575 per ticket.  Figure that a megafight of this magnitude would be somewhere in the middle, but probably closer to the record.  Splitting the baby, which I think is conservative, they would be able to sell 17,000 tickets at about $800 a pop.  That brings in $13.6 million in live gate alone.  Nowhere else in the world is there enough money just waiting to be spent that you can average a ticket price that high.

The casinos are willing to pay...

For the biggest fights, casinos are willing to pay massive site fees in order to retain a fight.  If you have a huge fight, tons of people (not just the people buying tickets) end up in the casino, and at the end of the day, the house wins more money than it spends from the extra gamblers.  Mayweather-Hoya was rumored to have a site fee in the $15 - $20 million range, although no official number was released.  Mayweather-Hatton had a $7 million site fee.  Even a dud like Hopkins-Calzaghe got an $8 million site fee from Planet Hollywood.  Conservatively, the site fee for a fight this big should be around $10 million, and it could be much larger than that.  That brings revenues from holding the fight in Vegas up to around $23.6 million, and possibly as high as around $35 million.

Once upon a time, there were mysterious benefactors who wanted to pay for the biggest fights in order to bring publicity to their countries.  To host the Rumble in the Jungle, President Mobutu paid Don King a site fee of $10 million (about $35 million in 2009 dollars).  I just can't think of any benefactor who would be willing to come up with that kind of coin to have the fight hosted in their hometown.  Bob Arum's been talking for years about having a big fight in Dubai, but it would probably cost someone $30 million out of pocket to make it worth everyone's while to hold a fight over there.  With budget crunches everywhere, it's unlikely that anyone would be willing to pay a huge site fee unless they pretty much know they'll be getting the money back, like a casino.

The fight needs to be indoors

This one's pretty self-explanatory.  In the past, there have been major fights aired in temporary outdoor stadiums, but that just can't happen.  First, the liability is too great these days to have a large temporary stadium.  Second, if a fight gets rained out, everyone loses lots of money.  It wasn't such a big deal when fights were being aired on network TV - if there's a rainout on World Wide of Sports, they can just put the fight on next week's edition, and everyone's pretty happy.  But in a pay-per-view situation, a rescheduled fight would probably require months of remarketing to ensure that they do not lose massive sales.  This precludes a lot of otherwise attractive venues from being feasible.

To make up the difference, you need a massive venue with high ticket prices

While holding the fight in a huge venue outside of Vegas is an intriguing idea, it's just not that feasible.  Without some deep pocket guaranteeing a lot of cash on the side, it's unlikely that a fight outside of Vegas could generate more revenue than a fight in Vegas.  And in this economy, I don't know if anyone's ego is that big.