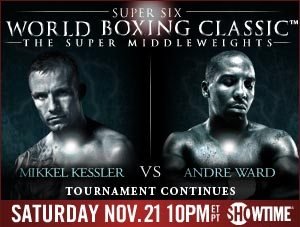 I don't know if you've heard, but Andre Ward has a really big chance to make a name for himself tomorrow.

Ward's Super chance at breakthrough (Yahoo! Sports)
Kevin Iole looks at Andre Ward, the Olympic gold medalist and nice man: "I would imagine it’s a problem fighting Andre Ward. He’s such a nice guy, you want to hug him rather than punch him in the nose. He’s polite to a fault, he smiles easily and he’s never got a bad word to say about anyone."

Round One’s Almost Done (Max Boxing)
Julian Kasdin's take on the fight. "This fight is taking place in Andre’s hometown, and while there are some doubts as to whether Mikkel is still the fighter to beat at 168, I do not think Ward will be the one to beat him."

Andre Ward Vs. Mikkel Kessler On Saturday (The Sweet Science)
David A. Avila compares Ward to another former American gold medalist, Oscar de la Hoya, and has some solid quotes from Ward. The best: "If I didn’t expect to beat every man in this tournament then I shouldn’t be in this tournament."

Notebook: Ward ready to fight for title (ESPN)
Dan Rafael quotes Ward as being very ready for the fight. "I've been here before with the Olympics and it's something that I relish. There's always going to be pressure. It just depends on how you deal with the pressure."

Kessler all set for Ward defence (BBC Sport)
Believe it or not, some people are actually focusing on Mikkel Kessler a little bit.

Can Ward take a punch? We'll find out (San Francisco Chronicle)
Kessler's trainer doesn't think Ward likes to get hit. Ward wonders who has ever hit Kessler to show how good his chin is.