Cotto-Pacquiao does 1.25 million buys on pay-per-view

Share All sharing options for: Cotto-Pacquiao does 1.25 million buys on pay-per-view 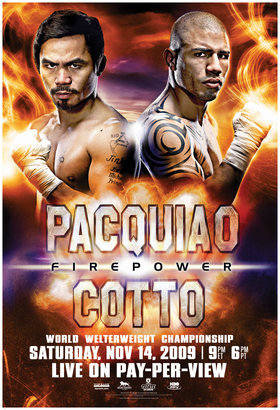 HBO has released the numbers, and the Miguel Cotto-Manny Pacquiao fight last Saturday generated 1.25 million buys on pay-per-view, beating out Mayweather-Marquez as the biggest boxing event of 2009. The fight generated $70 million in pay-per-view revenue to go along with its $8.84 million live gate.

The 1.25 million number equals what Pacquiao did a year ago against Oscar de la Hoya, though it doesn't quite reach the larger numbers that were being bandied about this week. Bob Arum said he thought it was looking like about 1.3 million, and he turned out to be correct. Usually, Bob is one of those going high, but I think this number more than pleases everyone involved.

Hatton-Pacquiao in May was a big success. Mayweather-Marquez was a phenomenal success. And this fight -- bigger than both -- is just more proof that if you put together fights and build guys right, boxing is far, far from dead.

I would have said six months ago that a Mayweather-Pacquiao fight approaching the all-time PPV record set by Oscar and Floyd back in 2007 would have been impossible, but now I think there's a real chance there. Breaking two million buys is damn hard. In fact, Oscar-Floyd is the only fight that has ever done it, with Lewis-Tyson being No. 2 all-time at 1.99 million.

But I think Mayweather-Pacquiao can do it. I don't know if they will, but HBO has already said they'll be putting unheard of backing behind this must-see event should the parties work out a deal, and it seems to just about all of us that a deal not getting worked out is almost unthinkable. Way too much money to be made.

Boxing is on a nice little roll this year, and really has been the last few years or so. Slowly but surely, the mainstream media is starting to get over their "boxing is dead" obsession, and I'm hoping that a Floyd-Manny fight will be the last time I ever have to read articles from basketball writers titled, "The fight to get boxing off the ropes," or what have you.

Congratulations to HBO, Top Rank and of course, the fighters.