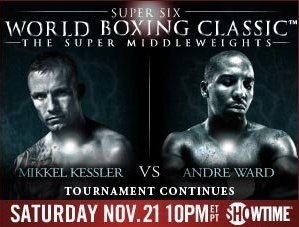 Where's Waldo? He's in Oakland. Waldo Rastel (better known to many of you as waldo47) is on the scene today for the official weigh-in for tomorrow night's Super Six tournament fight between WBA super middleweight titlist Mikkel Kessler and unbeaten American and former Olympic gold medalist Andre Ward.

Waldo covered the press conference a couple of days ago, and will have live updates again today in the comments section of this post, including the weights as they come in. The whole shebang is scheduled to start at 2pm local time in California, so 5pm ET. No word on whether or not there will be another high school cheerleading performance.