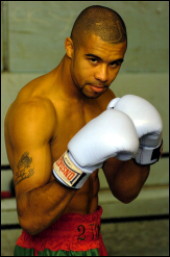 European junior featherweight titleholder Rendall Munroe overcame something of a slow start to outpoint Italian challenger Simone Maludrottu in a terrific fight today in Nottingham. Munroe won on scores of 116-112, 116-112 and 115-113. Bad Left Hook scored the fight a 114-114 draw.

Munroe's victory not only allows him to retain his title, but gives him the right to a shot at WBC titlist Toshiaki Nishioka. After the fight, Munroe said he was ready for the title shot immediately. The 29-year-old bin man by day from Leicester would be a pretty wide underdog against Nishioka, who has not lost a fight since 2004.

Munroe (20-1, 8 KO) used relentless pressure and his size and in-ring weight advantage to pull out the victory. Neither man was particularly accurate, but both threw tons of punches and showed no stamina issues. Munroe turned the fight around after six rounds, after which I had him trailing 58-56.

It was then that he began constantly pressing Maludrottu (30-3, 11 KO) into the ropes, throwing punches in bunches, and getting rises out of the Nottingham crowd. It was the strategy he would use for the rest of the fight, and what gave him the win.

Maludrottu, 31, used effective activity and some nice counter-punching to stay in the fight, but he had a rough spell between the 8th and 10th rounds especially. In the final two rounds, I felt he came back fairly strong to tie things up at six rounds apiece, but he fell short of that on the official cards.

Maludrotto and Munroe both put all they had into what turned out to be a highly entertaining affair. There were almost no clinches, even though they fought the majority of the bout with their shoulders pressed into one another. The pace was brisk starting in the latter half of the first round, and neither used jabs effectively at all. Munroe targeted the body, while Maludrottu tried to work upstairs on Munroe.

Munroe might well do everything he can to get the Nishioka fight first, but he could really stand to take something else first, I think. He's a really likable guy and certainly came to fight today, and he showed an ability to adjust mid-fight that wound up making the difference. But Nishioka is on a different level than Maludrottu. Maludrottu showed no snap on his punches, only once rocking Munroe's head back noticeably. Nishioka would have capitalized on some of those times that Munroe left himself wide open tonight, because Maludrottu actually did capitalize on them, he just wasn't a strong enough puncher to make anything happen.

All in all, though, the focus should be on a terrific effort from both. They put on a hell of a show, and this will be a contender for Fight of the Month.