Share All sharing options for: Francisco Rodriguez dies after fight in Philadelphia 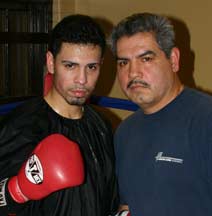 A rough, rough year (to say the least) for deaths in boxing has continued into the autumn and winter of the year. Chicago-based bantamweight Francisco "El Niño Azteca" Rodriguez died after collapsing in a Philadelphia ring last night. He was just 25 years old.

Rodriguez was born on June 15, 1984, in Guadalajara, Mexico. Bernard Fernandez of the Philadelphia Daily News has more on his background:

His father was a boxer in Mexico and in Chicago, and trained all three of his sons. Tito won a national Golden Gloves championship as a 17-year-old and then retired from the ring.

Francisco was the best of the three. He had a 76-6 record as an amateur, won the 2001 national Golden Gloves title and was a five-time Chicago Golden Gloves champion.

I recommend reading Bernard's full article, as it's as in-depth a look as you'll find anywhere. Rodriguez's career ends with a record of 14 wins (8 by knockout) with three losses.

Ring physician Jonathan Levyn checked in on Rodriguez several times to monitor his condition and said that he saw no evidence that the fighter was in particular distress.

"I've replayed it over and over in my mind - the fight itself, the time between rounds," Levyn said. "He was coherent. He answered all my questions - simple questions like, 'Where are you? What's your name?' And his eyes were reactive. It seemed like he was OK.

"A few minutes later, I was being called back into the ring [to attend to Rodriguez]."

[Promoter JJ] Peltz said that Rodriguez, who had been inactive since an eight-round unanimous decision over Torrence Daniels last Dec. 12 in the Chicago suburb of Cicero, Ill., looked to be in peak physical condition. His prefight medicals had raised no warning flags.

Julia Borcherts of ChicagoBoxing.com penned this profile article before Rodriguez's pro debut back in January 2005. His BoxRec sheet is here.