Share All sharing options for: Pavlik-Espino, Diaz-Malignaggi cards fleshing out 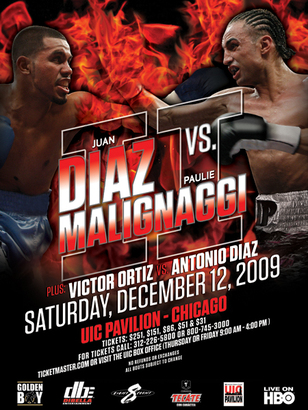 Top Rank announced its full PPV card from Mexico and Ohio today. The card takes place on December 19, and there's nothing surprising.

In Youngstown, Kelly Pavlik defends against Miguel Espino, and Vanes Martirosyan looks to pick up a regional trinket against Willie Lee (17-5, 10 KO). Lee is a New Orleans-based fighter. This fights are pretty comparably competitive on paper. In Mexico, Humberto Soto faces a badly faded Jesus Chavez, and Nehomar Cermeno meets Alejandro Valdez. Cermeno-Valdez is probably the best fight on the show.

The Diaz-Malignaggi rematch card in Chicago is loading up the names, according to Dan Rafael. We already knew that Victor Ortiz will face Antonio Diaz on the TV undercard. But also featured will be Erislandy Lara taking on Luciano Perez in his first 10-rounder and Golden Boy prospects Hylon Williams and Jermell Charlo. Lou DiBella is getting his name fighters a Christmas bonus, featuring Yusaf Mack, Randall Bailey (moving up to welterweight), Dominick Guinn and Deandre Latimore. Mack, as of now, will face Ross Thompson.

I'll tell you, if you're in or near Chicago, hit that show. That's some strong stuff.