Save your money, Zab Judah doesn't deserve it

Share All sharing options for: Save your money, Zab Judah doesn't deserve it 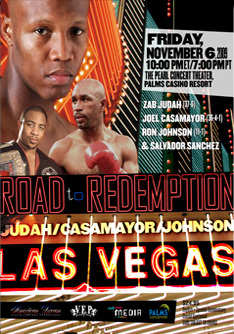 This Friday night at The Palms in Las Vegas, a couple of former world champions return to the ring. You'll have the option to order the broadcast for $24.99 on pay-per-view. And as much as I support boxing being available in all forms for anyone that wants to see a fight or a few, I cannot in good conscience support this card.

Why? I love boxing. And fighters like Judah aren't good for the sport at this point. I've bashed Zab before, and have admitted he's just not one of my favorite fighters. Never has been, never will be. But he's a frustrating guy as a fan, too, because his talent has never, ever been the problem. And it's not heart, either.

Don't forget that Judah, former junior welterweight titlist and welterweight world champion, had a fight lined up on the July 18 Mayweather-Marquez undercard. When that fight was moved to September 19, Judah was still to be involved, against the same exact opponent. Matthew Hatton, the brother of Ricky, was ready, willing, able and, frankly, not much of a risk. Judah's pure talent trumps Matthew's so horribly that even the fact that Matthew is a big-hearted scrapper and Judah is anything but probably wasn't going to matter.

When Matthew Hatton decided to stop being jerked around by Judah's in-or-out act and take a minor welterweight title fight with Lovemore N'dou, Judah was offered Antonio Diaz as an opponent. It appeared good to go.

Then Zab pulled out entirely, bailing on the biggest boxing event of 2009 because the opponent apparently wasn't to his liking. "Not a big enough fight," he said. He then turned down a proposed fight with Shane Mosley, who he had agreed to face in 2008, only to pull out when he had an argument with his dad and allegedly punched a shower door.

He turned Mosley down. "Not enough money," he said. In the same breath, he said he'd be taking a couple of tune-up fights before the end of 2009.

The available names at 147 came no bigger than Mosley. Judah's already been spanked by Floyd Mayweather and Miguel Cotto, and Mosley's desperation to find an opponent led him to Judah more than Judah being a legitimate contender anymore.

So which is it, Zab? Is it the money or the name value?

Whichever it is, neither will be present on Friday, when he gets back into the ring for the first time in a year to face journeyman Ubaldo Hernandez (22-19-2, 10 KO). Hernandez, 32, hasn't fought in two years, since he lost two straight to Frankie Figueroa and Rogelio Castaneda Jr., so is Judah trying to tell us that this is a better fight than Matthew Hatton or Antonio Diaz? That this was worth turning down Shane Mosley? That it's a legitimate fight in any way whatsoever?

He's taken "tune-up" to the absolute extreme with this opponent, the third man to be associated with Judah for this fight. He worked his way down until he found something easy enough, it appears. And he doesn't deserve your money or attention for this travesty, either.

On the undercard, former lightweight champ Joel Casamayor returns with his own completely overmatched opponent, 27-year old club fighter Jason Davis (11-4-1, 3 KO), an absolute non-threat. But Casamayor's fight at least has a story to it. The 38-year old Cuban will be moving up to junior welterweight for the fight, 14 months after losing his 135-pound crown to Juan Manuel Marquez.