Share All sharing options for: Naito-Kameda fight does ridiculous TV ratings in Japan 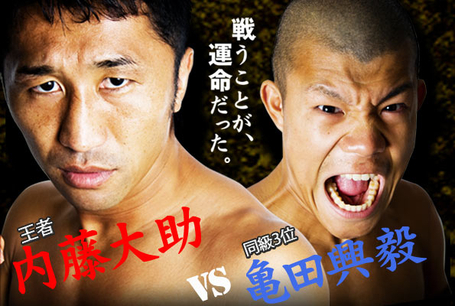 The Sunday fight between Daisuke Naito and Koki Kameda did magnificent TV ratings as expected in Japan, with the fight averaging 43.1% and peaking at 52.1% on TBS (Tokyo Broadcasting System).

The fight was billed as the "Japanese Fight of the Century," and not only lived up to it with its insanely impressive TV performance, but lived up to it in the ring, too. It may not have been a Fight of the Year contender or anything, but it was a very intense fight, an impressive boxing display by Kameda, and a valiant effort from Naito.

This once again just goes to show that when you look past the United States, boxing is not just doing well, but it's thriving. It does so for different reasons than when it does well in the United States. Other countries see their boxing stars as sports heroes still, while in the United States, a guy like Floyd Mayweather can possess great skills and even become a crossover mainstream star, but he's still not LeBron James or Adrian Peterson or anything like that. In Denmark, Mikkel Kessler is a genuinely major star. In Japan, Naito, Hasegawa, Kameda -- all major stars. In Australia, guys like Anthony Mundine, Danny Green and Daniel Geale do great business. In the UK, several boxers have very dedicated followings, from Ricky Hatton to Carl Froch and on down the line. Germany regularly has massive crowds for guys like Felix Sturm, Arthur Abraham, and so on, and Sturm rarely even fights what many consider to be a legit challenge. Canada has become a hotbed with guys like Lucian Bute, Jean Pascal, Adrian Diaconu and Steve Molitor, and Molitor is the only one even born in Canada.

It's a different game in other countries, and I always find it interesting to watch international fights and witness just how different it is, in terms of presentation, intensity in the crowd, atmosphere, etc.

Simply put, the eyes on Naito-Kameda blow away the eyes in the States that watched Cotto-Pacquiao or Mayweather-Marquez, the two biggest shows of the year on American soil.