A Heavyweight Burden for David Haye

Share All sharing options for: A Heavyweight Burden for David Haye

Let's just come right out and say it: If Nikolai Valuev retains his WBA heavyweight title on Saturday in Germany when he faces David Haye, the heavyweight division remains that far off from anything terribly interesting happening.

Even though Haye takes his share of talk for being mouthy or arrogant or egotistical, or for ducking out of fights with both Klitschkos this year after making such a show of calling them out, I think the vast majority of boxing fans around the world will be rooting for Haye to take Valuev out of the picture.

It's nothing personal against Valuev, really, it's just that his fights stink. He's deserved to lose more than the one time he has. John Ruiz beat Valuev and was jobbed. A 12,000-year-old Evander Holyfield beat Valuev and was jobbed. Valuev has plenty of legitimate wins, too, I'm not saying that he doesn't. I'm also not saying he's somehow not a legit fighter because he happens to be seven feet tall.

It's just that his fights are rotten to watch, he's generated no significant interest over his career, and if he was going to make anything happen, he would have by now.

Haye, on the other hand, has a future. He's bigger than he's often given credit for, at 6'3" with a 78-inch reach. He's a fitness fanatic, the type of guy that stays in immaculate shape between his fights, much like his would-be rivals, the Klitschkos. He's got massive power. And at 29, he's still young enough to stir up some genuine interest in the still-failing heavyweight division.

But for as much talk as there is of Haye knocking Valuev out, I just can't see it. Brickhaus said something to the same effect, and here are the two scenarios I think are most likely for Saturday.

Haye will out-quick and batter Valuev, but never break him. He will win a clear decision -- clear even in Germany -- and head off to his likely mandatory fight with John Ruiz, another thriller waiting to happen. 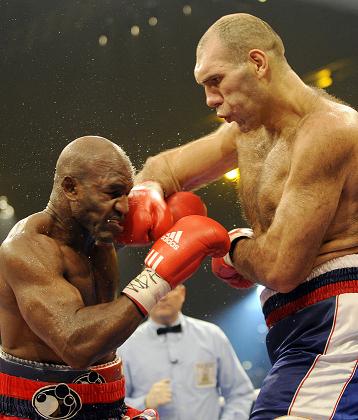 Haye's chin has always been a bit dodgy. Monte Barrett managed to rock him around a little bit in his proper heavyweight debut last November -- coincidentally, the last time Haye fought. With the unusual angles from which Valuev can punch a man, including straight down, Haye has got to be careful to not leave himself wide open. For such a huge man, you could say that Valuev doesn't punch that hard. But it's relative; he is a huge man, and he punches plenty hard enough to knock Haye out if David gets reckless.

I can't see Valuev being stopped by Haye unless it's an accumulation of body work that just breaks Valuev's spirit and gets him to quit on his stool or something like that. It's not that I underestimate Haye's power, which I think is outstanding. It's that I think the only guy in the division that might be able to seriously knock Valuev out is Wladimir Klitschko, were Wlad willing to unleash one of his cannon right hands or a series of left hooks like destroyed Ray Austin a couple years back. Valuev's just such a mass of flesh, blood, bone and muscle that I don't think anyone will really hurt him too bad without the perfect shot, and like him or not, he's not a dumb fighter, and he protects himself.

I am oddly excited for this fight because of what a Haye victory could mean. Haye is an exciting fighter who could finally spark some real interest in the division. We all recognize that the Klitschkos are great talents and have become as close to unbeatable compared to the rest of their division as it's likely to get, and that's nice, but they're never going to stir up any real emotion or interest unless they were to do the unthinkable and fight each other.

David Haye is the sort of talent and personality that can revive a division like this, which has stagnated but does have some nice young talent here and there.

But if Valuev wins? That's a bitter question to taste, really. If Valuev wins, and deserves to have won, then Haye leaves Germany dejected, embarrassed and in many ways, debunked in the court of public opinion. It'd be a long, hard climb for him back up the ladder. And it would mean that still another of the major heavyweight titles is controlled by a man who just doesn't make for a compelling night at the fights.

For the good of heavyweight boxing, David Haye must win.