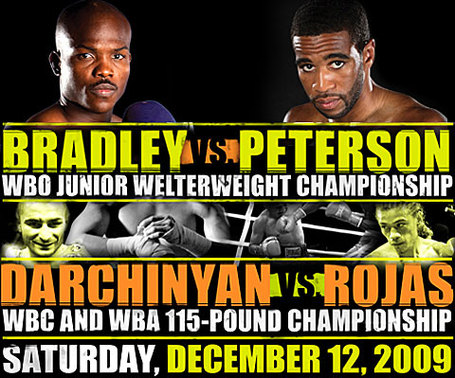 Both fighters started fast, with Bradley knocking down Peterson in the third round, but Peterson stormed back in the same round, turning the fight into a bit of a war.

But soon enough, Bradley (25-0, 11 KO) took over and in many rounds, was flat-out dominant. Peterson (27-1, 13 KO) boxed pretty well, but was just a bit outclassed by the stronger Bradley, whose power is better than his KO rate, something it seems we've been noting since the Junior Witter win last year. Bradley used constant motion and a lot of angles to beat a pretty straightforward Peterson, who just couldn't keep up overall.

For Bradley, this could hopefully lead to a big fight. By rights, he should be in the running for a money bout with Ricky Hatton, but he won't be; Hatton wants a bigger name for his opponent, and that's understandable. There are good fights for Bradley, but he may have to seek them out. I don't see anyone banging this guy's door down right now.

As for Peterson, the loss is no shame. Bradley just keeps getting better and better, and losing to a world-class fighter doesn't make you a hype job. Peterson still has a lot of career left, and I'll bet he wins a title or two along the way.