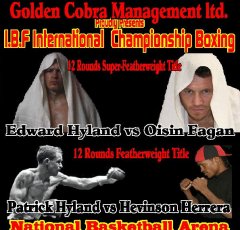 There weren't a whole lot of people in the National Basketball Arena in Dublin for this local battle between Irish prospect Eddie Hyland and journeyman Oisín Fagan, but as soon as it ended, press went out. This was a fight you had to track down.

Originally aired on Setanta Ireland, Hyland-Fagan can now be seen in full on YouTube, and I truly recommend it. I fear that for some, the lack of crowd noise and the iffy commentary can ruin what is a truly punishing, back-and-forth war of attrition between a couple of hungry fighters who leave it all in the ring. In my mind, I tried to imagine this fight having been positioned, say, where Chavez-Rowland was in November, just beneath Cotto-Pacquiao. Obviously that's not realistic or anything, but I just tried to imagine it with that size of a crowd, a crowd that excited to see a fight. This would have gone over like gangbusters and had a lot of people on their feet.

Though Hyland's superior boxing is probably what won him the bout, this was a fight, and make no mistake about it. These two went toe-to-toe for 36 grueling minutes, Fagan taking the worst of it but never backing off, never giving in to the younger man. Though Fagan, 36, has never gotten over the hump and likely never will, he has made a name for himself over the years as a pretty decent opponent, one that always comes to fight. Hyland, 28, likely will never become more than a European-level fighter at best. But if neither of them ever have another fight this good, they did give us this one, and that's something to be thankful for. This was a fight fought by two men as if they were in front of 60,000 for the championship of the world. 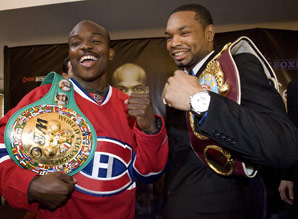 This 140-pound title unification was lost in the shuffle a bit this year, overshadowed later in the month by Froch-Taylor for most, and by a couple of smaller, better fights by myself. But when I went back and re-watched it (I missed it live thanks to Lightweight Lightning), I found myself riveted despite knowing the outcome.

For all of Kendall Holt's faults as a boxer, you can basically never say he's in a bad fight, unless he's against Demetrius Hopkins, and even then it's clearly not his fault. Holt is a guy whose own power is underrated and whose iffy chin is overstated. He goes down a lot, but he always seems to get back up. Yes, he's been stopped twice, but one of them was a first round TKO (and we know my stance there) and the other was a disaster in Colombia against Ricardo Torres.

It was a big, big fight for both men. Very memorable is the two of them forcing some of the worst trash-talk you'll ever hear in the pre-fight pressers, as it seemed they had no real ill will toward the other man and were doing it merely because that's what you're supposed to do. When the bell sounded, the respect was obviously there.

Holt floored Bradley two times, once in the first round and again in the 12th, but was unable to keep pace with him overall, giving Bradley a unanimous decision win (114-112, 115-111, 115-111). Overall, Holt and Bradley both proved they're among the best at 140 pounds. Bradley proved himself the real deal and no one-fight wonder. 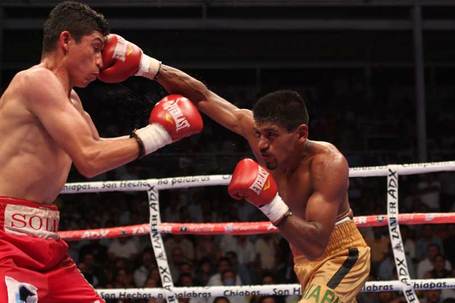 Our own Brickhaus called this "probably the dirtiest fight of the decade," and it was indeed a wild one. Cruz has burst into the top ranks of the featherweight division by basically abandoning all common sense and just swinging, swinging, swinging at his opponents, constantly throwing his hands and hoping to effectively disable his opponents, many (if not most) of whom are more skilled than he is. Solis' only pro loss prior to this came at 130 pounds against Manny Pacquiao, and he was a pretty heavy favorite going in. Surely, this would be the night that Cruz's luck met its demise.

But it wasn't to be. Cruz had the crowd solidly behind him, as Solis was booed more than most foreigners are against Mexican fighters. Late in the fight, Solis rallied to take clear control, but by then Cruz had opened up enough of a lead on the official scorecards. You can easily argue Solis should have been declared the winner, but it was no robbery or anything to get up in arms about. Just a close, close fight.

Oh, and yes, a very dirty brawl. In the third, Cruz lost a point for rough tactics, and lost another in the fifth for a headbutt. Solis was penalized two points in the fifth for an intentional low blow, and another two in the seventh for the same thing. It's a fight has to be seen, because it's so much different from all the other top fights of 2009. 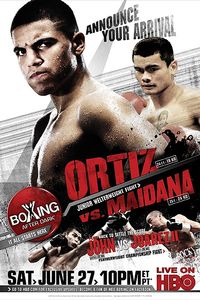 I also should have included this as an honorable mention on my Upset of the Year post, so I'll talk about that now. It's not that Maidana should truly have been any big underdog. He'd just challenged Andriy Kotelnik for a world title, putting up a very good fight and winning in the eyes of many. The Argentine slugger was a very live dog at least coming in.

But the HBO poster to your left spells it out. "Announce Your Arrival" -- this was to be Victor Ortiz's coming out party. Buried behind him and in smaller font is some "Maidana" fellow that nobody is much concerned about. Yeah he can hit, but Victor is "Vicious" and surely the new "Golden Boy" at Golden Boy.

While the story of the fight was that Ortiz quit in the sixth round, I think it's thus easy to forget how thrilling this fight really was. Ortiz floored Maidana in the opening round, living up to expectations. But Maidana came back with a grenade of a right hand, sending Ortiz to the canvas. Maidana went down again in the second, and yet again later in the same round. Down three times, Maidana pressed on.

At what point did something turn for Ortiz? He could knock this guy down, even hurt him, but Maidana wasn't crumbling the way guys like Jeffrey Resto and Mike Arnaoutis had done in recent bouts. He kept coming back and hitting Ortiz -- hard. Ortiz went down in the sixth, and pretty much gave up on the spot. With a cut bleeding fairly well and his opposite eye swelling closed, Ortiz and the referee went to the fight doctor, and the bout was quickly called.

Someone did indeed announce their arrival that night, and it was Marcos Maidana. Victor Ortiz is now on the rebound, but may never quite be the same. Time will tell.

Utter war. It can't really be called high-level boxing, but this was just pure offensive warfare, and I loved every minute of it. What more could you ever ask of a Sky undercard scrap? This is domestic-level boxing at its absolute most thrilling.