Despite many setbacks, HBO triple-header still packs a punch

Share All sharing options for: Despite many setbacks, HBO triple-header still packs a punch 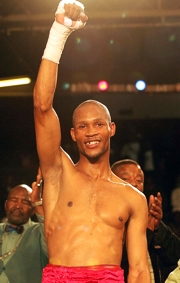 When Saturday night's HBO Boxing After Dark card was first conceived, it looked very different than the card that will actually take place tomorrow

When Mayorga dropped out either due to money demands or Shane Mosley busting him up last September (you decide for yourself who you believe), the event was thrown into some degree of disarray. Mayorga was the name feature here. There was a good chance Angulo (14-0, 11 KO) would beat beat him, but Ricardo was the guy people know. After no-showing the first press conference, Mayorga shortly after pulled out entirely. And did I mention that the card didn't even have a venue until a few weeks prior to the show?

With Mayorga out, the original co-feature of Nate Campbell fighting for the first time in 11 months against South Africa's Ali Funeka (pictured) was bumped to main event status. Even if by default, it's gratifying for many to see a hard-working, genuine guy like Campbell in an HBO main event.

Let's backtrack a little to January. The Berto-Collazo card was originally set to feature Sergio Martinez taking on Joe Greene in the opening televised bout, but Greene was forced to withdraw because of an injury. When Don King and HBO tried to insert 154-pound titlist Daniel Santos in as a replacement for Greene, Santos balked at taking the fight on short notice, but it was originally reported that Santos-Martinez was agreed to for February 14, making an already attractive card a tripleheader.

Take a minute. Inhale. Let it all settle. Now breathe out.

If you're still having trouble putting together what the card is, here it goes.

In the main event, Campbell (32-5-1, 25 KO) will put up his IBF and WBO lightweight titles against Funeka (30-1-2, 25 KO), who garnered international attention last year when he slaughtered contender Zahir Raheem inside of four rounds in East London, South Africa. Campbell also won the WBA title when he upset Juan Diaz in March 2008, but shortly after relinquished that belt, which is now held by Paulus Moses. Technically, Jose Alfaro had beaten Prawet Singwancha for the "vacant" title, though the belt was still held by Juan Diaz, in December 2007. That was three months before Diaz-Campbell even took place. Diaz won the title in 2004 and made seven successful defenses, and also unified it with the IBF and WBO titles.

OK, sorry, that turned this into another head-scratcher. Just forget about it.

In Funeka, the 36-year old Campbell is up against an exceptionally tall foe for the 135 pound limit. Funeka comes in right around six feet, while Nate is 5'7", far more standard for the division. Campbell will also be fighting ring rust. A September bout with Joan Guzman was aborted when Guzman failed to make weight, leading Campbell to declare bankruptcy. It's been a long, crappy ride for Campbell, who should have had the best year of his life in '08, at least professionally.

But Funeka has never fought outside of his home base in South Africa, never been under the HBO (or any American TV) lights, never been in a fight this big, or in a land this foreign to him. There are a lot of wildcards, not the least of which is Campbell's advancing age. Boxers have been said to "get old overnight" many times, and with almost a year out of the ring, who knows how Nate will look on Saturday?

Funeka also hasn't exactly been active. He's been out of the ring since that July destruction of Raheem, perhaps wisely biding his time until he could land that IBF mandatory, not wanting to risk anything. Prior to that his last fight came in September 2007. His only loss came to Mzonke Fana in 2002. 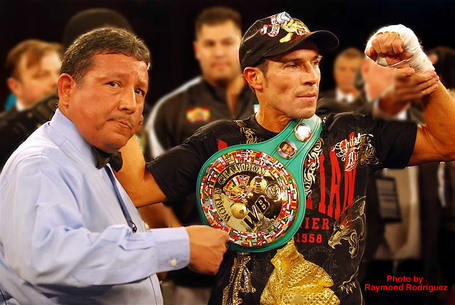 The main co-feature is now Martinez putting his interim WBC junior middleweight title on the line against Kermit Cintron, the winner in position for a shot at full WBC titleholder Vernon Forrest. Forrest likely has no intention of facing a slick boxer-puncher like Martinez or a heavy-handed slugger like Cintron, but it's nice that they have incentives.

Martinez (44-1-1, 24 KO) is the part of Argentina's expanding boxing fraternity, and one of the few that has made it out of the country and become a real contender on the global scene. He last fought in October, stealing the show on HBO's second "Night of the Prospects" Boxing After Dark, which also featured Angulo and Yuriorkis Gamboa. Martinez overwhelmed tough Alex Bunema that night, and forced Bunema to retire after eight rounds of action.

Martinez's inclusion on the show was a bit of a misnomer, as the 33-year old is no prospect. Yet by so handily routing Bunema, he was finally taken seriously after a career record padded by a lot of tomato cans and flat-out bums, with only the random semi-quality win along the way. Martinez's only loss came to Antonio Margarito in 2000. He is unbeaten for the last eight years. (His draw came in his third professional fight.)

His combination of speed, defensive skills and enough pop to keep opponents honest makes him a dangerous proposition for the slow-footed, slow-handed slugger Cintron (30-2, 27 KO), but Cintron's power is very real. Outside of two crumbling losses to Margarito, Cintron has turned out the lights on just about everyone he's ever fought. He returned to the ring last November to outpoint former 140-pound titlist Lovemore N'dou in what was described as a really ugly fight by those that saw it live in Nashville on the untelevised portion of the Taylor-Lacy card.

Martinez-Cintron could be a sleeper great fight if things mesh as they could. Despite their differences, they are both guys that like to push the tempo. Cintron tries to dominate with power, and Martinez tries to break his opponent's spirit with high-octane flashiness.

And then there's poor Angulo, the one-time main eventer. Just 14 fights into his pro career, promoter Gary Shaw was ready to stick him into the ring with a fading but still strong and experienced Mayorga, so that says a lot in this age of overly cautious promoters protecting the "0" at all costs as long as they can. Angulo's new opponent is 32-year old Mexican Cosme Rivera (31-11-2, 22 KO), who has never fought above 147 pounds.

Conventional wisdom says that the rugged Angulo smashes Rivera down, but Cosme gave Andre Berto one of the toughest fights of his career last year on ESPN2, and even found a hole on Berto big enough to put him down in the sixth round.

Rivera is tough enough that he's one of only six men to go the distance with slugger Antonio Pitalua (way back in 1999), and in his 11 losses he's been stopped just once, when he fought welterweight champ Zab Judah in 2005 and was TKO'd in the third round.

All in all, I think you have to give King, Shaw and HBO credit for pulling this card together by the skin of their teeth, and still putting on what is a highly entertaining show on paper. It's not what they first envisioned -- different main event, extra fight added, fighters dropping out left and right -- but it has some bite still.