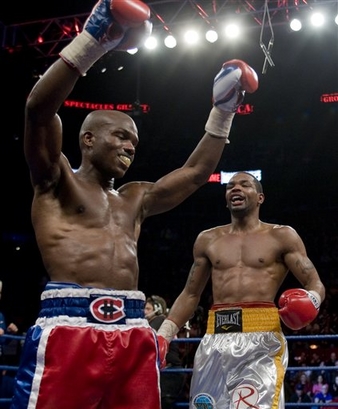 Since we had such a massive slate of fights yesterday, let's just run them down recap style. This isn't what I normally do, but it's the best way to do it today.

Bradley (24-0, 11 KO) unified his WBC 140-pound title with Holt's WBO strap, and put himself in position for a fight with a bigger star, though that may end up just being Nate Campbell and not the Hatton-Pacquiao winner or anything. For Holt (25-3, 13 KO) this was a heartbreaker, as he lost on scores of 115-111 (twice) and 114-112. Both guys were in good form, the fight was pretty crisp and moved quickly, and Bradley proved for certain he's no one-fight wonder, he's a world class guy at 140 pounds. Holt also acquitted himself pretty nicely against a good boxer. The two competitors exhibited great respect for the other man, which might explain why their forced trash talk was so awkward in the build-up for this fight. They like each other.

Speaking of class acts, IBF super middleweight titlist Lucian Bute was seated at ringside for this one. After Andrade (28-2, 21 KO) won a fairly dominant decision over Tsypko (22-3, 12 KO) to put himself back in position as Bute's mandatory, making a rematch likely, Bute cheered him enthusiastically, gave him the thumbs up, and shook his hand. I really think Bute's just in another class apart from Librado, but that's a rematch that people want and it's good to see the fighters understanding that. Andrade won this fight the way he always wins: Muscle and guts.

I said if the stars aligned this could be a slugging war and a classic. This was the other option, someone getting creamed in short order. After a first round where Valero (25-0, 25 KO) boxed at a distance, he struck like a cobra early in the second round, dropping Pitalua on a 1-2 and clearly messing him up pretty badly in the process. Pitalua (46-4, 40 KO) saw his 14-fight win and knockout streak ended, but he did get up to get knocked down twice more. The silver lining? This fight didn't last long enough for referee Laurence Cole to screw it up.

Although I thought it was fairly obvious that Katsidis was comfortably winning this fight, the Golden Boy announce team of Barry Tompkins, Bernard Hopkins and Doug Fischer were strangely biased for Chavez, who was a "hometown" favorite in Austin. The crowd didn't even give Aussie Katsidis (25-2, 21 KO) any credit for making a clearly gassed, frustrated, and beaten Chavez (44-5, 30 KO) quit after seven rounds. This might well have been the last fight of Jesus Chavez's career. He tried very hard and made the fight pretty fun to watch, but he just didn't seem to have a lot left, and it's been a while since he has seemed to have much left. Tragedies, injuries and plain old age have taken their toll. As for the future, what this fight taught me is that the plodding Katsidis is going to have to get very lucky to ever beat a top guy. He's just not skilled enough. In some ways he's the 135-pound Librado Andrade.

Hernandez went down in the first round. He went down again in the second. He later scored a knockdown on Escobedo when he accidentally stepped on his lead foot and Escobedo tripped up. But the 38-year old Hernandez, who was undersized and outgunned, showed remarkable courage and made this a fight to remember, a war of attrition that joins the short list of 2009 Fight of the Year candidates with Marquez-Diaz and Dunne-Cordoba. Escobedo (20-1, 13 KO) became, as Doug Fischer said, a man with this fight. For Hernandez (43-8-1, 24 KO) this was likely the end of the line. He said he'd retire if he lost this fight. He hugged Escobedo at the start of the 12th round and when the final bell rang, the two received a well-earned standing ovation. The fight was simply outstanding, rough and tumble with two guys who badly needed the win and fought like it. If this truly is the end of Hernandez's career, he went out on his shield like so many great warriors before him have. Happy trails, Carlos, and thanks for one more great fight.

The night's biggest upset came when fringe contender Reyes (31-4-2, 20 KO) suddenly and destructively dropped a front-running Diaz (36-5, 26 KO) in the fifth round after laying back for the first four. He finally perfectly timed Diaz and was able to knock him down once and finish him off on a second knockdown mere moments later. The end was sudden, stunning, and very clear. This was no early stoppage, nothing controversial about it. Diaz was being chased and beaten all around the ring. This is a MAJOR step back for the 29-year old Diaz, whose two biggest recent fights have been stoppage losses to Reyes and Juan Diaz. For Reyes, it's a massive step forward and puts him in line for a title shot against someone in the next 12-18 months.