The simulation has Pacquiao stopping Hatton in the 11th round. Hatton dropped Pacquiao in round six, though.

"The later rounds saw the revival of the quick moving Pacquiao, who outpaced and out boxed Hatton yet again. Lightning fast left jabs wreaked havoc on Hatton through Rounds 7, 8 and 9 before a commanding right hand brought him to the mat in Round 10. Badly hurt and looking sluggish, Hatton was unable to beat the count after falling to another deadly right hook from Pacquiao in Round 11."

It's all good fun, and I love the Fight Night series but unless a LOT changed it's hardly where I'd go for any serious simulating. Most notable for me was this screenshot: 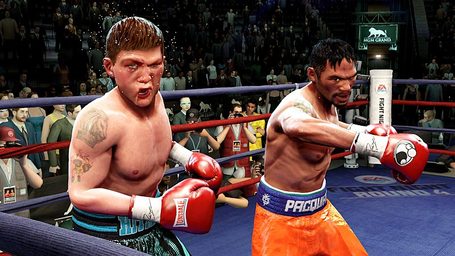 Pacquiao looks like Gollum. Ricky Hatton was screen captured between fights judging by that melon.