Share All sharing options for: Official Picks for Ward-Miranda 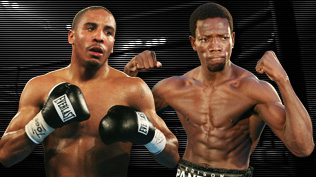 Andre Ward (18-0, 12 KO) faces the greatest test of his career this Saturday night in Oakland when he takes on Colombian wrecker Edison Miranda (32-3, 28 KO).

It's an interesting fight from many viewpoints. Ward is facing a genuine puncher for the first time. Miranda is looking to get back on track in a highly-publicized fight (or at least close enough to it). A guy like Miranda always will find a home on TV because of his style and because of the way he fights. It's all or nothing. The only times he's lost has been against the world's top two middleweights. Kelly Pavlik whomped him over seven rounds, and his other two losses came to Arthur Abraham. In their first bout he broke Abraham's jaw and lost a 12-round decision; the second time around, at a 166-pound catchweight, Abraham finished him in the fourth.

But Miranda is always dangerous, and Ward, 25, has yet to go against a big, hard-hitting guy. His February win over Henry "Sugar Poo" Buchanan was hardly inspiring, which is owed in part to Buchanan's non-aggressive nature and Ward's inability to really press him, which likely would have led to a stoppage. He was the bigger man, far more naturally skilled, and had it all on "Sugar Poo."

Miranda, 28, isn't the best fighter around or anything. He's a big-talking slugger whose chin can take some shots, but he's very, very beatable. Still, Miranda has some physical advantages. Ward is 6'1" with a 73" reach; Miranda, at just 5'10", has very long arms (77 1/2" reach), and the power that can be generated at the end of his fists is very real.

Technically, Ward is Miranda's superior. The ex-Olympian is no doubt a far, far better pure boxer than Miranda, and if he stays back and works his game, he should win a wide decision. But Ward promises to be in Miranda's face, perhaps looking at what Pavlik and Abraham did: The bully (Miranda) can be very effectively bullied, and can't fight worth a damn off moving backward.

If Miranda catches Ward and pulls the minor upset, I will not be surprised. But I can't pick Edison over a good boxer, which Ward definitely is, and his power is there, too. Gotta go with the guy with the better pedigree. Ward UD-12