Night of the Cruiserweight Controversy

Share All sharing options for: Night of the Cruiserweight Controversy 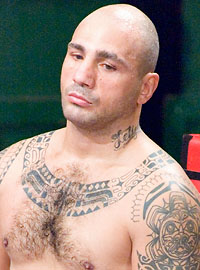 Giacobbe Fragomeni and Krzystof Wlodarczyk fought to a draw in Rome in what looks to have been a back and forth matchup with good sustained action.  While reports have this one as a legitimately close fight that could have been scored either way, this wasn't without a measure of controversy.  Fragomeni was knocked down once by Diablo officially in the 9th round, but unofficially he was knocked down again late in the round.  The ref ruled that it wasn't a knockdown because he was pushed and then hit while he was down.  Points didn't get deducted from Wlodarczyk, but Fragomeni was given some time to recover well enough to last the rest of the fight and pull out the draw, retaining his cruiserweight belt.  I haven't had the chance to watch the full fight, but the first 6 rounds of the fight is available at: Part 1, Part 2, Part 3, Part 4, Part 5 (and I assume the rest is still being uploaded to Youtube).  Based on a good first eight rounds (round 7, the beginning of part 5, is particularly great inside fighting), some controversy and a close end result, it looks like this is a serious FOTM candidate.

Elsewhere in the cruiserweight world, Victor Emilio Ramirez beat Ali Ismailov by split decision in Buenos Aires to retain his paper cruiserweight title.  Those who watched the fight are saying that the decision was controversial, and that if the fight was anywhere other than Argentina, Ramirez would have lost.  The sooner we see Ramirez face off against interim beltholder Ola Afolabi the better; I've had enough of this paper lunacy.  It's pretty sad when your sanctioning body has two belts at the same weight out there, and neither beltholder really deserves to be in the top 10.  I haven't gotten around to watching it yet, but the full fight is available via Youtube at the Argentine boxing blog Boxeo Hoy.  FOTM candidate Abregu vs. Garcia is up there as well.