Jones-Lacy done for Aug. 22 on PPV

Share All sharing options for: Jones-Lacy done for Aug. 22 on PPV 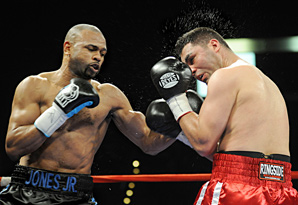 According to the Tampa Tribune, the Roy Jones Jr.-Jeff Lacy fight is signed:

That 10-percent gap closed Wednesday as Lacy signed to fight the eight-time world champion, likely Aug. 22 at a site to be determined.

Because no deal could be made with a television network, the fight will be on pay-per-view.

"It's all on ink - now they just have to ring the bell," said Lacy, of St. Petersburg. "This is great. It's my second promotion under my own banner and I get to co-promote a huge fight with me and Roy Jones. Second fight out, it can't get any better than that."

I'm getting married August 15 and was hoping they could put this fight on that date, so that I wouldn't pay for it. Sadly, this likely means I will.

I still think this is an ugly matchup for Jones, who won't deter Lacy at all and doesn't take punches particularly well.