Share All sharing options for: Baboon Takes Australia by Storm

In case you missed it, tomorrow Anthony Mundine will square off against Daniel Geale.  While it may not be huge news in the US, this is a pretty big fight in Australia.  "Choc" has a huge following down under as an outspoken fighter that many people love to hate, and the undefeated and (relatively) clean cut Geale has the opportunity to take out Mundine to become a legitimate player on the world middleweight scene. If Mundine wins, a lucrative rematch with Danny Green is likely next.  Green recently came out of retirement seeking such a rematch, and Mundine-Green I was the highest grossing fight in Australian history.  Geale might not want to face off with light heavyweight Green if he wins, but he'll be thrown into the mix to start facing the Pavliks and Abrahams of the world.

I almost never talk about betting, but reportedly Geale is a 3-1 underdog, which almost seems too good to be true.  Mundine's looked like dreck since coming back from his eye infection, getting knocked down by Crazy Kim and looking a bit slow with a low workrate against journeyman Shannan Taylor. 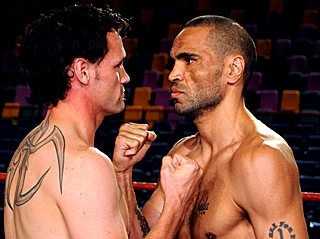 He also looks so weight drained at 160 that he looks like he just popped out of Van Gogh's "The Potato Eaters."  Geale doesn't have tons of power, but he might have enough power to knock out Mundine, who was one of Sven Ottke's six knockout victims.  Mundine's elusiveness has kept him on his feet in the past, but he really just isn't moving the way he used to anymore.  Also, there's a good chance that Geale even outpoints Mundine if he throws as little as he did against Taylor.

Being the controversial figure that he is, it's pretty hard to upstage Mundine in the Australian media.  Yet, somehow, 0-0 New Zealand bare knuckle street fighter Gary "The Baboon" Gurr has managed to do just that.  Gurr is taking on Sonny Bill Williams, a professional rugby player making his own professional boxing debut on the undercard.

First, during the pre-fight press conference, things were moving along in an orderly fashion when, about halfway through the conference, Gurr stormed in, demanded a "f*cking seat" at the head table.  Then, at the weigh-in, Gurr has said he wants to win by first round knockout so he can get back to the bar.  Some more entertaining stuff from the Sydney Morning Herald:

Asked if he was wanting to psyche out Williams and the Australian public who appear to have thrown their support behind the rugby union convert, Gurr said: "F--- you guys speak a whole bunch of crap. All I've heard from you c---- is talk, talk, talk. Lets just get it going."

He then told a reporter who asked whether he planned on the fight lasting more than one round: "Do you plan to get out of here?"

After gatecrashing a press conference yesterday at Brisbane Entertainment Centre attended by Mundine, Geale and Williams, Gurr admitted he was angry at being snubbed.

"That's a f---ing joke. I'm the f---ing main event. That's bulls---," he said before giving Williams a push in the chest when the pair faced off in the ring afterwards.

Asked if he was concerned about fighting Gurr, who is renowned for knocking out bouncers at Auckland nightclubs and had previously declared he would knock out both Willams and Mundine, the 23-year-old former NRL superstar said: "He doesn't know how to string words together, I'll sort him out tomorrow night."