Official Picks for This Weekend's Fights

Share All sharing options for: Official Picks for This Weekend's Fights 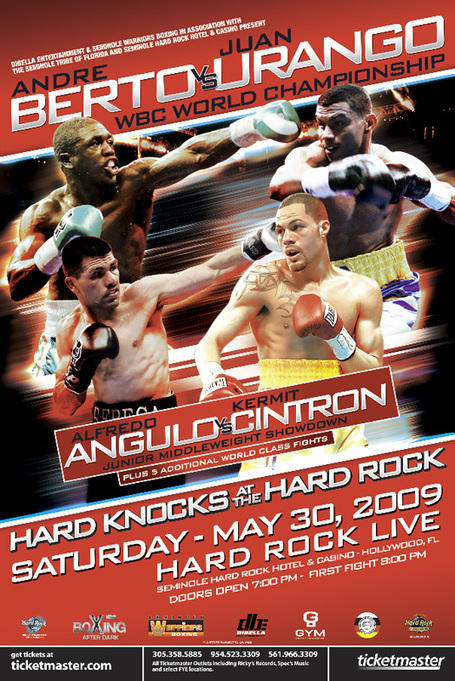 After what essentially amounted to a bye week for boxing (a few notable events, but nothing on major American TV and little major news), we come up on a weekend where we get back into the picking game with a great HBO double-header and an overseas heavyweight title fight.

140-pound titlist Urango is coming up in weight and while he looks at first to have the frame for it, he's really going to be among the shorter 147-pounds should he stay. At 5'7" he's around Miguel Cotto's height, so it's not a total hindrance or anything, but Cotto is a body-punching tactician and a strategist. Urango does nothing but wing power shots from all four corners.

Berto (24-0, 19 KO) passed his first true test in January with a win over Luis Collazo, which was hard-fought and well-earned. Though Collazo troubled him rather greatly, Berto took advantage of every opportunity he got. When Collazo took rounds off, Berto went out and won them. When Berto thought he needed the 12th round to win the fight, he went for the knockout and dominated the final three minutes. Urango is a southpaw like Collazo, but that's the last thing they have in common in terms of fighting style.

But Urango can thump, and if Berto has one of his defensive lapses, he can be caught. If he gets caught by Urango, anything could happen. Cosme Rivera scored a flash knockdown against Berto, and Collazo wobbled him early in their fight. His chin hasn't really been tested to any great degree, and Urango is so predictable and wild that Berto might be able to just beat up on him with speed and sound technical boxing if he so chooses.

It would seem that Berto, a Florida native, would have a homecourt advantage in Hollywood, FL, but Urango has lived in that town for a while now and has fought at the building eight times. This will be Berto's first time at the Seminole Hard Rock.

This is a fight that really does promise action and could turn into a barnburner in a hurry. Berto is on the cusp of being able to realistically include his name in fight talks with the likes of Shane Mosley, Miguel Cotto and the other top welterweights. He's been on HBO several times, is a budding star with a fan-friendly style, and a loss to Urango -- who is still virtually unknown -- would be hugely damaging in the short term. I don't think Urango has what it takes to beat Berto, though. He doesn't have the size, the speed, the skill, or the huge power to get a miracle shot. I think Berto might get in trouble once or twice, but wins a fairly wide decision in an exciting fight. Berto UD

Ah, Kermit Cintron. If you've been around long enough, you know my feelings on Cintron. They don't come from any personal feeling, though; it's merely analyzing him. And hey, I may be wrong. But if you haven't been here long, here's my scouting report: Good but overrated power, flat-footed, rather awful boxing skills despite efforts to change that, buckles badly under pressure, lacks heart, lacks character.

Again, nothin' personal. I think Juan Diaz -- a great dude with a great attitude most of the time -- lacks championship toughness, too. And if you wanna give Cintron's two losses to Antonio Margarito the benefit of the doubt, well, OK. His draw against Sergio Martinez was a gift from the judges, but Martinez is a cutie and designed to badly trouble a fighter like Cintron.

Angulo is basically a Margarito clone without the plaster, so we'll see if Cintron really belongs near the top at 154 or 147 or anywhere. He will have a fairly big reach advantage (74" to 69") on Angulo and his KO rate -- which I feel is sort of fabricated in a way -- is good enough that you do have to give his power its respect. No doubt one of his right hand bombs could hurt Angulo, who won't be moving around the ring like Martinez did. Angulo will be there for Cintron. The question is whether or not Cintron can stand up to the relentless attacks that Angulo brings. I don't think he can. I think he'll buckle. Angulo TKO-8

Chagaev is the only guy to ever beat Valuev. Let's hope he does it again so that maybe this Valuev crap stops. He was so bad against Evander Holyfield that it made me never want to see him fight again despite the fact that I think he's a nice enough guy. Chagaev isn't really much more exciting, but at least his fights aren't automatically tagged with "freak show," which sounds mean because Valuev can't help that he's really tall, but he also can't help that he's really slow, powerless, and boring. Chagaev SD-12