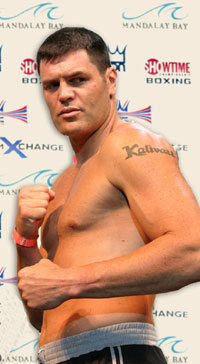 [Update by SC, 05/29/09, 3:34 PM EDT] - The entire card has been called off according to a press release by Sauerland Event. The thirty hours' notice that either Meehan or Brewster would have had (and Valuev too) put a substitute fight out of discussion, though it was "explored." So because Chagaev contracted Hepatitis again, nobody who was supposed to get paid on Saturday will get paid.

[Note by Brickhaus, 05/29/09 3:44 PM EDT ] - This is a real crock.  If the stories are true, the parties have known about this for a full day, had a full day to negotiate, already had two ready and willing substitutes on the undercard, and had a couple of other decent bouts scheduled on the undercard.  My guess is that this boils down to Valuev not wanting to fight someone he didn't prepare for.

Additionally, this should be the end of Chagaev's career.  You don't just keep contracting Hepatitis A or B over and over again.  There is no cure for Hepatitis C, which is a blood-borne disease that can only be transmitted through blood to blood contact.  It also is a disease that shortens one's life expectancy significantly.  Maybe the Finnish medical standards are stricter than elsewhere (which is likely), but if he has an incurable disease that can be transmitted through blood, he shouldn't be boxing anywhere, even if he can technically get away with it.  Frankly, it's not much different from Tommy Morrison if he does.  At least with HIV, you can lower the viral load enough that it becomes nearly noncontageous at times.

[Update by Brickhaus, 05/29/09 2:18 PM EDT ] - So, it turns out that this story might not be complete hogwash after all.  In Dan Rafael's chat, he said he contacted Chagaev's promoters about this one.  Their response - "situation to be decided, we'll keep you posted."  So here's what we do actually know - Chagaev and Valuev have weighed in, Meehan is the WBA #1 contender, Meehan is fighting on the undercard and the Telegraph still hasn't retracted its story.  Is it possible that Chagaev failed a pre-fight blood test in Finland, and they're trying to keep things under wraps until things can get officially sorted out?  Also when the Telegraph article was posted, it said that Meehan's manager was about to hop onto a plane from Australia to Finland.  If he's in the air, it could take a while for things to officially get sorted out.  Also, it appears that a German news report is saying that Chagaev did indeed test positive for Hepatitis, and that Valuev can make the decision as to whether he wants to fight him anyway.

[Update by Brickhaus, 05/29/09 10:57 AM EDT ] - This appears to be a false report.  The weigh-ins just happened for Valuev and Chagaev, so this seems like mularkey.  Paint me a sucker, I guess.  I'll keep most of it up simply because Meehan is next in line for the winner.

[Note by Brickhaus, 05/29/09 10:37 AM EDT ] - The Telegraph reported this a few hours ago, but it has yet to be picked up by any news sources or made official; on the other hand, the Telegraph hasn't retracted the article.  The article does say they had the exclusive, and cites the source as Meehan's manager, but every other article that's come out since then has been carrying on as if it's business as usual. They might have jumped the gun on this one, in which case I apologize.

The Daily Telegraph is reporting that Ruslan Chagaev has contracted hepatitis (yet again), and that Kali Meehan will be taking his place in the main event, fighting for the WBA heavyweight title against Nicolai Valuev. This takes some of the luster away from the fight, but there's a reason you keep guys like Meehan taking stay-busy fights on the undercard.

Meehan is a perfectly reasonable title challenger, although he's probably the wrong style to beat Valuev.  He's a big guy with a big punch, but not much by way of technique or workrate.  It's telling that he's been top 5 in the WBA's rankings for a while now, yet he still keeps his day job as a construction worker.  He forced Darryl "Makes Spectators a Touch Sleepy" Williamson to quit on his stool a while back, and he lost a close split decision to Lamon Brewster in his only previous title shot.  Brewster himself is also fighting on the undercard, so there's a slim chance that he might get the shot instead, but it sounds like Meehan was willing to take the fight for less, and he's ranked higher by the WBA anyway.