I choke up a little bit every time I remember coming in on May 7, 2007, turning on ESPN, and seeing the scrolling news that Diego Corrales was dead.

The exciting "Chico" lived just 29 years and nine months on this earth, but he left boxing fans with a lifetime of memories, most notably but not limited to his unbelievable 10th round stoppage of Jose Luis Castillo on May 7, 2005 -- two years to the day before he died in a motorcycle crash in Las Vegas.

My mind immediately shot back to that fight, and I had to watch that 10th round again. Here it is in all its glory:

It was the greatest fight I have ever seen. And it still gives me chills.

Diego Corrales was not the greatest boxer ever. But he was special. He was a man that refused to give up no matter how dire the circumstances. In this case, he came back and sent shockwaves through the boxing landscape. In other cases (his overwhelming loss to Floyd Mayweather Jr. and his final fight against Joshua Clottey), he tried until there was nothing more he could possibly offer, even though the only thing left was a final bell to ring. He was the bravest, gutsiest man I've ever had the pleasure of seeing fight in my generation.

Boxing still misses you, Diego, and we'll never forget your contributions. May you rest in peace. 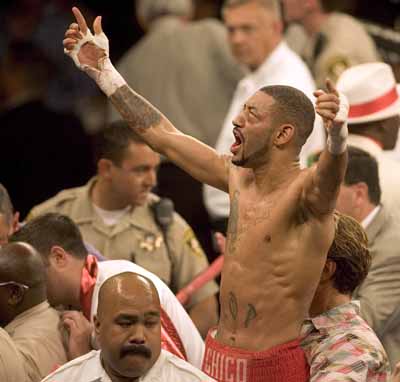