Share All sharing options for: Sulaiman at it again: WBC prez dislikes Mayweather-Marquez 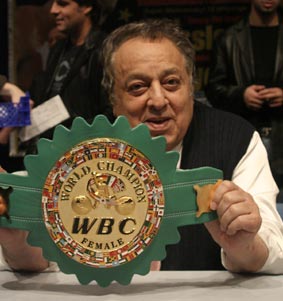 If a WBC title was on the line and he was getting a fee, I bet he wouldn't be talking. WBC president Jose Sulaiman had little to say about Hatton-Pacquiao, but you'll remember he went to the ends of the earth to try and discredit Oscar-Pacquiao because of the size difference.

With Mayweather-Marquez, he isn't getting quite so crazy, but one thing he says really sticks out:

"They do not belong with each other. They are very far apart in divisions. They are both fighters and will do their best, but there's a lot of difference. There should be something to do, against allowing the freedom of promoters in the way that they are doing this."

Please, huh? Let's cut the B.S. with all of this. I questioned Oscar-Manny, too; many did. But I'm done with weight issues if we're talking about a two-division jump. Pacquiao went from 135 to 147 (with Oscar coming down from 154) to beat the crap out of Oscar. Marquez is going 135 to a catchweight of about 143 to fight Mayweather, who isn't really a welterweight either. With Floyd's fanatical workouts, I guarantee you he could still make 135 if he wanted to. That makes him bigger than Marquez, yes, who might still be able to make 126 if he had to, but the truth is they just aren't that different.

I'm not even saying you can't think the weight favors Mayweather greatly and pick him because of that. That's fine -- but let's not get all overboard about a weight difference like this. It doesn't put Marquez in any imminent danger, at least not any more so than any other fight he could reasonably take. He's not going to be going up to super middleweight to fight or anything. I don't have any more fear for Marquez's health or safety or well-being in this fight than I would if he fought Edwin Valero.

And the thought of Sulaiman and his cronies in the other alphabet soup organizations having the ability to take away "the freedom of promoters" in any way, shape or form is horrifying. They take enough away from boxing as it is.

I think Sulaiman just made me a bigger fan of this fight. I don't love it, either, partly because I think there are better fights (from an aesthetic standpoint) for both guys. But I'm not concerned about it, either, and there's really no reason to be other than the fact that it's boxing, a brutal sport, and any fight is worth some level of concern.

We'll see. It's worth finding out.