Share All sharing options for: Pacquiao v. Mayweather: Who's the best right now?

To me, this isn't a debate, and I'll explain why: Floyd Mayweather Jr. has yet to fight in this comeback of his, so I didn't rank him in the latest Bad Left Hook P4P Top 20 update. When asked in the comments where I'd have put him had I put him in, I said No. 2. I'd thought about it, but decided the best course was to wait until we see how he looks in July.

But it is an interesting topic. Let's say -- y'know, for the sake of argument -- that Mayweather was never actually retired and simply on a year-plus sabbatical from active participation. I'd have dropped him out of the top 20 earlier this year anyway, but that is neither here nor there.

Who's got the best case now? Let's take a look. 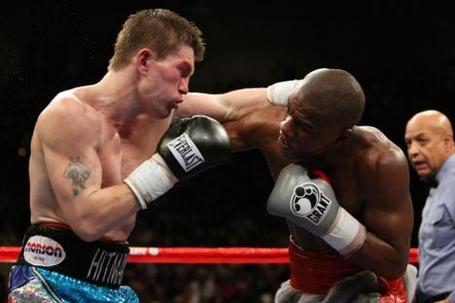 I truly feel that at the time they met, Castillo was Mayweather's best opponent, and the fact that the rugged brawler was Floyd's toughest win backs that up. Some even argue Castillo won the first fight.

Some might not put an aging Oscar this high. I do, and it's for a simple reason that I don't feel gets enough credit: Mayweather had no business fighting as a junior middleweight. I feel the fight was pretty close; I scored it a draw at the time, having rewatched it I had it 115-113 or 116-112 Mayweather. Oscar beat himself in this fight, and the size was a clear trouble for Floyd. The fact that he won fighting that high is pretty significant.

Corrales was 33-0 going into this fight and Mayweather took him to the woodshed. It was the most pronounced domination of his career. Corrales couldn't do anything against Floyd.

Somewhat of a forgotten Floyd win, since he's beaten names more familiar to American fans like Arturo Gatti, Jesus Chavez, Zab Judah, and even Chop-Chop Corley. Hernandez was a huge junior lightweight at 5'11" with a 72" reach. Mayweather dominated him for eight rounds, Hernandez quit, and he never fought again. Hernandez's only other career loss came to Oscar de la Hoya at lightweight in 1995, when Oscar forced him to retire after six rounds. But Genaro beat a lot of good fighters (Jorge Paez, Azumah Nelson, Carlos Hernandez, Raul Perez, etc.) and retired for medical reasons. It was a really good win for young Floyd.

Hatton was unbeaten. He didn't stay that way after Floyd knocked him silly in ten. 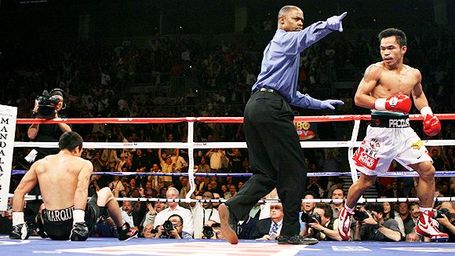 Floyd hadn't yet officially "retired" (that came in the summer of '08), but as it turned out these two battled in March for what became pound-for-pound rule. Pacquiao edged out Marquez on the official scorecards in a thrilling fight that busted PPV records for fighters at this weight in the main event. Debate still goes on, but you can say the same about Floyd-Castillo I. The pair also met, of course, in their epic draw in May 2004.

Say what you will about Hatton, and yes Floyd beat him first. But Floyd beat Ricky Hatton at 147 pounds, where we knew for a fact Hatton wasn't "himself." Pacquiao not only came to Hatton's "house" at 140, but he plastered him in two rounds and hurt him with just about everything he threw. What Pacquiao did to Hatton cannot be overstated.

The first win more than the second. In November '03, Pacquiao savagely routed Barrera until the Barrera corner finally stopped it in the 11th round. Marco Antonio was one of the world's best at that point, and Pacquiao pounded him ruthlessly. Their second fight wasn't the same; Barrera fought mostly to hang on, but I still had them both around the P4P top ten range at the time. Barrera had been excellent against Marquez seven months prior, but he didn't come out to beat Pacquiao so much as he came to be in the ring with Pacquiao and cash the check.

Both of these wins are far bigger than the second Barrera win, and I debated in which order to put the two opponents, but it was the first MAB victory where we all went, "Whoa -- this guy is for real." Morales beat Pacquiao the first time they squared off, but Pacquiao beat the spirit from Morales in the rematch, and finished him off for all intents and purposes ten months later when he overwhelmed him inside of three rounds. The image of warrior Morales on his hindquarters, knowing there's nothing he can do, and shaking his head "no more" will always stay with me -- as will his classy raising of Pacquiao's hand after the fight.

This was massive -- make no mistakes. This might also give you a spoiler idea on where we're headed. But it comes with the asterisk that Oscar flat-out was not healthy for this fight. Anyone will admit to that, even Freddie Roach. Still, going up in weight and not just beating a guy many thought would be physically too much for him, but putting him out to pasture with a one-sided whooping? That is special. Pacquiao matched pound-for-pound with dollar-for-dollar with this fight, it appears.

The Common Opponents: Oscar and Ricky

Again: Floyd went up to 154 and edged out Oscar, who looked fit, strong, and comfortable that night, at least until Floyd took his jab away and/or Oscar couldn't figure out how to use the jab anymore and/or Oscar foolishly gave up the jab.

Manny, on the other hand, fought a drained, even older, even more of a part-time fighter when he fought Oscar. You cannot argue who beat the better Oscar de la Hoya, I don't think. It was Floyd.

And on the flipside...

Hatton looked physically good against Manny. Says he felt great. He also was strong and in shape for Mayweather, but those seven pounds had already proven to be a lot for Ricky to give up. Hatton got Manny at his weight -- he was 44-0 there. And he was blown out. Manny takes this one with ease.

This one isn't hard to address, either: Outside of Morales, which was twice avenged, Manny's losses mean nothing. He was a young, 112-pound fighter who fought with one hand and had no defense. Today's Manny Pacquiao and the Pacquiao that was stopped by Rustico Torrecampos and Medgoen Singsurat aren't the same person.

It doesn't mean a whole lot in terms of what they've done, but Pacquiao doesn't back down from challenges. His last two fights have been him going to other guys, and pretty good guys at that. Mayweather has long been accused of ducking the top welterweights, though again he did fight legit champion Carlos Baldomir, and his fight with Zab Judah had already been signed for April 2006 before Judah was shockingly upset by Baldomir in January. At welter, Mayweather fought Cinderella Man Baldomir, Judah and Hatton -- neither of whom are at their best at 147. There was Margarito, there was Cotto, there was Mosley, and he fought none of them, though to be fair most accounts I've read say that it was Mosley that backed out of possible negotiations for a fight with Mayweather at 147. It is what it is, and you can make of all the scuttlebutt what you wish, but I don't take a lot of it all that seriously.

I stick to what I've said recently in comments and just back-and-forth with folks here: Mayweather does not have Pacquiao's résumé anymore. While Floyd has been talking, Manny has been fighting and winning. As much as I think Mayweather doesn't get enough credit for some of the great things he's done from hardcore fans, I also don't think it matches what Pacquiao has done.

Was Corrales ever really a great fighter? Was Hernandez? Was Oscar still great? Was Ricky great at 147? I don't want to slam any of them, but I say no on every count. I don't think Castillo was great, either. All of them were very, very good, save perhaps for Hatton, who I'd put at simply "pretty good" at 147, something even Hatton would agree with, I think.

They've both had several other notable wins, and I put their "extra credit" good wins about on par with one another.

There are a lot of ways to go about debating this, I believe. But for me, it's Manny Pacquiao, and it has nothing to do with the fact that I'd rather watch Manny fight than I would Floyd.

The best way to settle this would be for the two of them to meet, if and when Mayweather beats Marquez in July. That's the old-fashioned way. Let's get old-fashioned.