Berto-Urango could be the next great fight

Share All sharing options for: Berto-Urango could be the next great fight 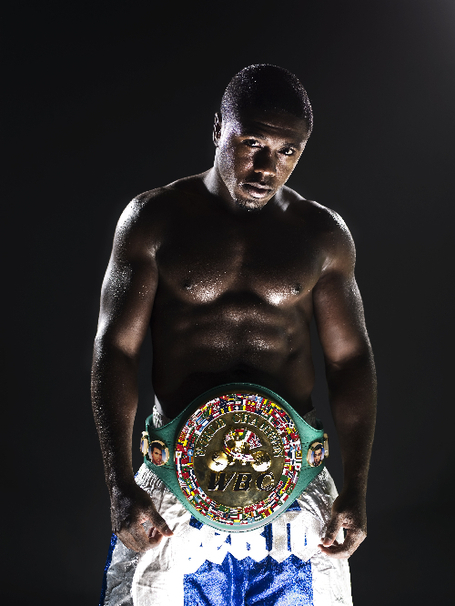 It's still a few weeks away, but I don't think it's too early yet to talk about Andre Berto's upcoming WBC welterweight title defense against Juan Urango.

We've all heard the stories about Berto's training as a youngster: His father driving behind him, nudging him with the car if he slowed down on runs. The 500 squats and push-ups. The discipline and heart it has instilled into him as a professional boxer. It appears to have paid off.

And he's also a fighter that gives back: In March, Berto went to his family's homeland in Haiti. On that trip, he met several of his family members for the first time, including his older sister. In 2008, he joined the board of the Carma Foundation, which supports the poor women and children of the island nation. Between fights, he's a philanthropist. How much more could you ask from a 25-year old titlist?

It was when Berto was matched up with Luis Collazo -- a former foil of Ricky Hatton and Shane Mosley -- that he finally "earned" his standing as WBC welterweight titlist. Sure, he won the belt vacated by a "retiring" Floyd Mayweather Jr. when he trounced Miki Rodriguez in June 2008, and had already defended it against affable vet Steve "2 Pound" Forbes in September, but he had yet to meet up with a top welter.

Collazo gave him that chance, and pushed him to his very limits. While Collazo has yet to score that Big Win, he remains a tough matchup for just about anyone. He's crafty, slick, has more power than his record might indicate, and he fights smart. Berto, at just 25, had not yet seen a fighter like Collazo. Now he has, and he passed his test with a close decision win, scoring that victory on the strength of a 12th round that saw the Miami native come out swinging for the fences, dominating the round and taking his belt and unbeaten record back home.

28-year old Urango is another story.

"Slick" or "crafty" are words that belong nowhere near him. I'm not sure we've yet seen Urango throw a meaningful jab. He is a straight-ahead, relentless brawler, all lunging hooks and power shots, and he's got a lot of grit and a so-far very sturdy chin. He's lost just once, to Ricky Hatton. But he's yet to fight over 140 pounds.

The question for Urango is this: Can he really fight at 147? Berto, at 5'8 1/2", is considered a small welterweight nowadays, and his stature is what gives some people pause. Urango is 5'7", though built like a linebacker and broad as a barn.

We've seen Berto handle some solid opponents with ease, but he's yet to face someone who brings pressure like Urango. Smart money says he has the skill to pick him apart, to counter him with fast, hard shots if he so chooses, and probably even dominate the fight. But with a guy like Urango there's always a puncher's chance, and Collazo did push Berto back to the surprise of some.

We'll have more on this fight in the coming weeks, of course, but I'll say this for now: I think we might be looking at the next great fight. These are guys who like to throw the leather, and Berto's mettled proved out against Collazo. I don't know if Urango is quite the perfect test. But I do know it has a lot of the ingredients -- and that for the rest of the month, it's the most attractive fight.