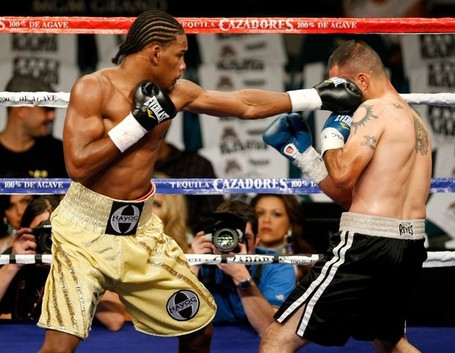 Jacobs faces George Walton, a 20-3 veteran who has a win over Carl Daniels and who has never been knocked down.  This is Jacobs' first 10-rounder.

Wilder faces some bum.  If you're interested, here's a nice fluff piece on Wilder and why he keeps facing bums.

Erislandy Lara was scheduled to fight, but he was unable to get a work visa in Arizona, the only state that requires a separate work visa for resident aliens.   I have no idea what the third fight on the card will be now.  Hylon Williams Jr. and Keith Thurman are both top prospects fighting on the undercard, so one of their fights (and possibly both of them) will be televised now, in all likelihood.

Elsewhere in the world, fringe contender Denis Bakhtov knocked out prospect and former amateur star Steffen Kretschmann in the first round.  There goes a hype train that never really got started.  On the same card, Dmitry Pirog won a unanimous decision over Kofi Janutah.  Janutah is no pushover, having given Arthur Abraham some problems and owning a first round knockout over Marco Antonio Rubio.  Pirog, now 14-0, has worked his way near the top of both the WBC and WBO rankings, and is setting himself up to be a legitimate contender at middleweight.  Finally, also on the same card, Herbie Hide keeps plugging away, scoring a third round knockout over a journeyman.  One of these days he'll get another title shot, this time at cruiserweight, and in all likelihood, he'll get knocked out again.

Telemundo also has a card airing tonight that starts late.