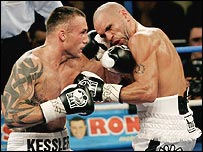 According to Rick Reeno, Showtime is currently in the process of setting up a major super middleweight tournament with most of the major players in the weight class.  Evidently, this would work by Showtime signing each of the fighters to multi-fight deals, and then having a round-robin style tournament with multiple cards.  The winners of the fights will be assigned points, and the four fighters with the most points would meet each other in semifinals and finals, hopefully with the end result of creating a lineal super middleweight champion.

The proposed matches are as follows:

Now obviously, there are a few stumbling blocks here.  First, Lucian Bute is not included in the tournament as proposed, which would make it difficult to create a new lineal champ.  He probably has the best resume at super middleweight over the last two years, and is the consensus #2 in the weight class.  Second, Mikkel Kessler is still having his legal troubles with Mogens Palle, although according to the article, Palle would give Kessler a special dispensation to participate.  Third, this means there's no Pavlik vs. Abraham, as Abraham will have permanently moved up to 168 in an effort to become a major player there. Fourth, it leaves Pavlik SOL, as the only decent potential opponents not participating would be Bute and Felix Sturm. Finally, even if it gets signed up, there are so many big promoters and big personalities involved that you'd have to anticipate a few hiccups along the way.

Still, if this is true, it's great news, and I'm thrilled that Showtime is trying to put something big together.  They've already made quite an investment in the super middleweight division, and a tournament like this would take it from a good division with a lot of depth to a very strong division with one or two pound for pound level fighters.