Share All sharing options for: Gatti exhumed for second autopsy in Canada 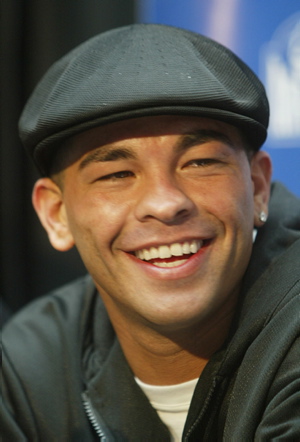 According to the Associated Press, Arturo Gatti's family in Canada is having his body exhumed and performing a second autopsy, in an effort to actually get the bottom of his cause of death. After saying he was stabbed and strangled, the official story is now that he hanged himself, after being hit in the head with a rock earlier in the night.

There is a lot more gloss now on the official story of Brazilian police:

Police ultimately concluded he hanged himself in the apartment early on July 11 from a wooden staircase column that was 7.3 feet off the ground. He stood on a stool and kicked it out from underneath him, police said. The autopsy report said Gatti was suspended for about three hours before his body fell to the floor.

Rodrigues said she was sleeping with the couple's son in an upstairs bedroom. She told police she went downstairs about 6 a.m. to get milk for the boy, saw Gatti's body on the floor and assumed he was drunkenly sleeping. It was not until she went back downstairs at 9 a.m. that she discovered Gatti was dead and called police. Saraiva said no suicide note was found.

"The first investigators to arrive at the scene only saw his body on the floor and the bloodied strap near his body," Saraiva said. "They assumed his wife strangled him."

Saraiva said 17 witnesses told police the couple got into a loud fight on a street near the beach in Porto de Galinhas the night before Gatti died. Saraiva said Gatti had seven cans of beer, along with two bottles of wine, over the course of dinner and partying at a bar.

Witnesses told police Gatti at one point picked up Rodrigues, who weighs about 100 pounds, by her chin with his right hand and tossed her to the ground.

Saraiva said at that point a security guard for a local hotel intervened, only to be punched in the face by Gatti. A small crowd that had gathered around the scene grew angry, with some throwing stones and even a bicycle at the boxer, the police spokeswoman said.

One stone hit Gatti in the back of the head, causing a wound that police originally said was caused by a small steak knife that was found near his body -- and which police showed off to reporters the day after Gatti's death.

I can't say I blame Gatti's family.  At first, Brazilian police were absolutely sure he was murdered, and now it's ruled a suicide with a very contrived story.  Hopefully this second autopsy can lay things to rest once and for all.